Do the Kids Care?

Climate change, if nothing else, is a time horizon risk: the longer you live, the more you are exposed to climate change and its impacts. Thus, to follow the logic, the old (and especially childless) should be less sensitive to climate change risk than the young. (For the different question of “Should the kids care?” see ‘Odds of Cooking the Kids’ here, here and here.) But do the young care?

A survey last year suggests the young care a little less about climate change than anyone else. This seems rather strange, since the young adults involved would have had a high exposure to the topic from early adolescence both through the media and school.

The first Climate Change Conference took place in Geneva 1979 a few years after a landmark paper by Wally Broecker in 1975 established a link between anthropogenic (human) CO2 emissions and temperature rise. The Intergovernmental Panel on Climate Change (IPCC) was established in 1988, but it probably took another decade before the topic spilled out of the academic community and into the public domain.

By around 2006 or 2007, few people would have remained unaware of the issue, even if they differed about the causes and severity of the problem. The documentary ‘An Inconvenient Truth’ show cased Al Gore’s campaign to educate citizens about the dangers of global warming and received extensive publicity. Meanwhile, the IPCC’s Fourth Assessment Report declared that human-caused factors were ‘very likely’ the cause of climate change and was widely reported. In retrospect, these years appear to have seen the high water mark for public awareness of the risks from climate change (partly because carbon-industry financed lobby groups had only just started to enter the debate on the skeptics’ side).

For a younger generation, the general media buzz over climate change was also supplemented by information they received via their school curricula.

In the UK’s case, a child in high school in the 1980s would only have come across climate change in school if introduced to the topic by an enthusiastic science teacher. In 1995, however, climate change was formally introduced into the National Curriculum, and nowadays a pupil has no choice but to bump up against it in variety of contexts including science, geography and even, occasionally, religious education.

In the United States, the federal, state and local involvement in education have made the delivery of climate change education a little more variable between schools. Nonetheless, there appears to be a consensus among teachers that climate change is taking place and that it should be taught. A position paper (here) from the US National  Association of Geoscience Teachers (NAGT) is unequivocal:

The National Association of Geoscience Teachers (NAGT) recognizes: (1) that Earth’s climate is changing, (2) that present warming trends are largely the result of human activities, and (3) that teaching climate change science is a fundamental and integral part of earth science education.

The National Association of Science Teachers (NSTA) is a little less forthright on the subject, but in a 2007 NSTA President’s report  entitled ‘Teaching About Global Climate Change’ we see this:

Central to environmental literacy is students’ ability to master critical-thinking skills that will prepare them to evaluate issues and make informed decisions regarding stewardship of the planet. The environment also offers a relevant context for the learning and integration of core content knowledge, making it an essential component of a comprehensive science education program.

Two of the most reliable sources of information for classroom teachers are the National Oceanic and Atmospheric Administration and the United Nations Intergovernmental Panel on Climate Change, both offering materials that are scientifically based and bias-free.

No prizes for bravery here, but by endorsing two sources that document the risks related to human-induced climate change, the NSTA in effect is adopting a similar position to the NAGT—but at one remove. The NSTA’s reticence is obviously because science teachers who promote awareness of the problem are likely to receive a lot of push-back; an NSTA survey (here) gives a sense of this: 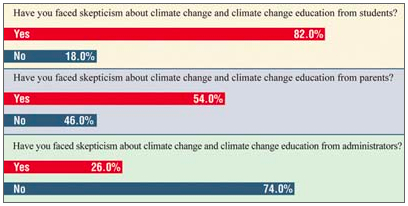 (Rather disappointingly for a science-based organisation, neither the number of educators who responded nor the climate change beliefs of the responding educators were reported, rendering any firm conclusions problematic).

Overall, however, for those students who had not already taken a firm position vis-a-vis the veracity of human-induced climate change from their parents, the senior school experience over the last 10 years or so would have taught most of them that the climate is changing and anthropogenic carbon emissions are to blame (based on scientific evidence). For those 1990s high school graduates, the school input on the topic would likely have been far more mixed. But by contrast, anyone over 35 is unlikely to have come across climate change at school.

So back to the survey—conducted jointly by the American University, Yale University and George Mason University—titled ‘The Climate Change Generation?’ The generation in question as per the survey definition was a sample of 1001 adults aged between 22 and 35 as of when the survey took place (between December 24, 2009 and January 3, 2010).

Given the educational backdrop of the ‘Climate Change Generation’ we get two immediate counter-intuitive findings from the survey. Younger people neither think about climate change more nor worry about it more (or at least no more than others):

And this being a risk blog, I am particularly interested in people’s perceptions of the personal harm they could incur. Again, the young don’t appear particularly concerned.

Moreover, despite the impression that climate change concern (and activism) is a province of the young (and almost a social norm these days), the data just don’t show this to be true:

Could it be that factor ‘youth’ is not determining the direction of the survey responses  (and when it does, the sign is opposite of what one would expect) because the ‘old young’, who had come of age in the 1990s when climate change was less reported, were diluting the signal in the data? The answer to this is ‘no’ since the survey also split the young adults into two cohorts: in effect, the ‘young young’ and the ‘old young’. Note the answer ‘not at all worried about global warming’ at the bottom of the chart sees the ‘young young’ the least concerned of all:

On reflection, it appears that education has had no impact on the brain’s perception of risk, which takes us into the realm of cognitive psychology. A traditional view of the risk appetite of adolescents has suggested that they have a feeling of invulnerability (and perhaps this extends to those in their twenties as well). However, more modern findings such as a paper by Cohn et al entitled ‘Risk Perception: Differences Between Adolescents and Adults’ suggests this is not the case:

Adolescent involvement in health-threatening activities is frequently attributed to unique feelings of invulnerability and a willingness to take risks. The present findings do not support either proposition and instead suggest that many adolescents do not regard their behavior as extremely risky or unsafe. Compared with their parents, teenagers minimized the harm associated with periodic involvement in health-threatening activities. Ironically, it is periodic involvement in these activi- ties that jeopardizes the health of most adolescents. Thus teenagers may be underestimating the risk associated with the very activities that they are most likely to pursue, such as occasional intoxication, drug use, and reckless driving.

So to get a better idea of what is going on, it is worth moving on to the field of heuristics and biases in the perception or risk, which has become a key area of study in economics and finance over the last 30 years. This new area of investigaton was kicked off by the pioneering work of Nobel Laureates Daniel Kahneman and Amos Tversky; a good and accessible summary of the work can be found in Kahneman’s recent book “Thinking fast and slow“.

One critical finding was the distinction between ‘choice from experience’ and ‘choice from description’. Experimental data show that rare outcomes are overweighted when they are vividly described but are frequently underweighted if they are abstract. By extension, a more abstract threat, like harm from radiation, may be overweighted as a risk as it calls forth rich associations that provide a vivid description: for example, images from Chernobyl, a scene from the movie ‘China Syndrome’ or a picture of a child atom bomb victim suffering from radiation sickness.

Keeping this in mind, climate change risk is rather difficult to grasp in terms of the potential impact on oneself: no photos of dying babies to give us a descriptive representation—or at least only abstract theoretical ones.

Furthermore, risks are underweighted if we have no experience of them. The experience can also go beyond one’s own experience and encompass those of others. Accordingly, a particular teen or adult may not have experienced an auto crash through reckless driving, but it is almost certain that the adult will know someone personally, either family or friend, who has suffered from a reckless driving act. They thus get an experience boost by proxy.

Thankfully, few of us have yet to experience severely negative effects from climate change. However, an elderly person is more likely to have experienced, or known someone who has experienced, a rare event that gives them a proxy association of climate risk. Through having touched on the experience of war, flood  and other natural disasters (and possibly even famine for immigrants from low income countries), older people are better aware that ‘ really bad stuff’ happens.

In all this, sets of statistical tables showing objective probabilities have far less impact on people’s perceptions of risk than one would expect if humans were no more than purely rationale calculating machines. Presenting a person with a dry set of stats will barely move the risk perception needle—whether the subject is vulnerability to HIV infection or the destruction of the planet. We are just not built that way (even if we did do some stats at school).

Critically, though, the old perceive only a little more climate change risk than the young. Humans, as a whole, look like a teenager engaging in unprotected sex when it comes to global warming. Whether this poor risk perception can be changed is something I want to return to in a future post.

8 responses to “Do the Kids Care?”