In this post, we will switch from a look at the shale gas outlook in the US to that globally. Again, the starting point is a forecast of total energy consumption out into the future, and then a discussion of what amount of gas would be needed to produce a true energy transformation. The latest set of forecasts we have are those from BP’s Energy Outlook 2012, just released this January. The report can be found here.

Interestingly, there is not that much difference between the aggregate energy numbers produced by the major organisations that predict energy supply and demand into the future (IEA, EIA, OPEC, BP and Exxon Mobile). I think that this is because they generally start with a GDP growth (and energy intensity) assumption and then work backwards to produce supply and demand forecasts. (The question of whether growth drives energy or energy drives growth is a topic for another post.) 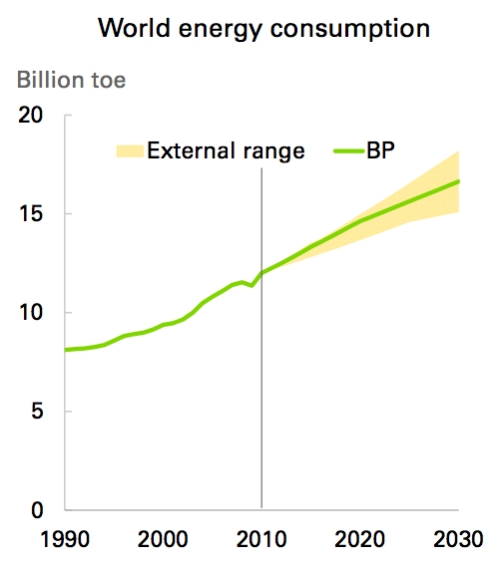 Another thing to note is that BP uses million tonnes of oil equivalent (mtoe) as its unit of comparison (and occasionally billion toe) rather than quadrillion British thermal units (Btu) which the EIA uses (and which I referred to in my previous post). To convert from quadrillion Btu to mtoe you can roughly multiply by 24 (a good energy unit of measure comparison table can be found here). Given that BP is using mtoe, I will stay with that unit of measure for the rest of this post.

Looking at the chart above, it is obvious that changes in the energy mix are only taking place at the margin: 2030 does not look a whole lot different from 2010 percentage share-wise. Natural gas has gained share from 23.7% to 26.1%, and oil is down from 32.2% to 27.2%. But critically, the real action is taking place within each energy category. While oil’s share of total energy is down, in absolute terms oil production has increased by 15.3%. Natural gas production, meanwhile, has grown by 50.2% and coal by 22.6%.

In the previous post, I mentioned how some observers believe shale gas would help solve energy scarcity, security and environmental problems. Accordingly, to the BP numbers, however, scarcity will only be solved if every category of energy production is able to grow. Only in this way will total growth in energy consumption of 1.6% per annum between now and 2030 be achieved. 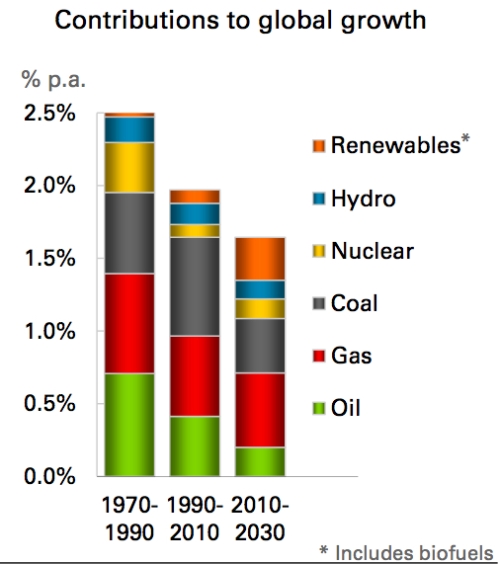 Turning to security, BP sees greater reliance on Middle Eastern oil supplies rather than less as the left-hand chart below shows.

Unconventional gas supply is seen jumping in the United States, and North America is seen becoming a net LNG exporter by 2030 (see chart below). However, the quantities involved appear to be almost a rounding error compared with overall global gas consumption. Dieter Helm, the energy academic and government policy maker, envisages US shale gas production as being a game changer from a security perspective, but this is nowhere to be seen.

For Europe and China, natural gas imports will pose a security risk equivalent to that for oil as these countries will become increasingly dependent on overseas (in reality Russian and the Middle Eastern) supplies by 2030. Unconventional gas production, including shale gas, is seen rising outside of the US but the amounts involved are almost an order of magnitude less than for conventional gas.

Finally, for shale gas in particular, or natural gas in general, a major contribution to the reduction of carbon emissions can only be made if gas displaces coal in the production of electricity. Unfortunately, BP’s numbers just don’t see this happening. Total global coal production is up 22.6% by 2030. Not surprisingly therefore, CO2 emissions continue to grow. We are not even close to the International Energy Agency’s required trajectory to keep atmospheric C02 concentration below 450 parts per million (a guideline threshold for dangerous climate change).

Of course, the BP predictions are just one view, and it could be argued that they are backward looking and don’t take account of the most recent developments in unconventional gas production. The problem with this argument is that it fails to recognise the supertanker nature of world energy production: in other words, it takes decades to steer the energy mix from one configuration to another.

To highlight this conundrum it is worth looking at another scenario analysis, the IEA’s special report entitled “Are We Entering a Golden Age of Gas?” published in 2011. At over 100 pages long, it is exhaustive in nature and covers every aspect of the production and consumption of natural gas, which somehow is never referred to by the promoters of shale. The premise of the report is one under which everything that could go right with gas in the energy mix does go right.

The Golden Age of Gas Scenario (GAS Scenario) takes the WEO-2010 New Policies Scenario as its starting point, and adopts new assumptions that have the effect of building a more positive future outlook for natural gas to 2035. These new assumptions include a more ambitious policy for gas use in China, lower growth of nuclear power, greater production of unconventional gas and lower gas prices.

Unlike in BP’s scenario, the IEA’s Golden Age of Gas scenario see natural gas overtake coal to become the second largest source of energy but still just behind oil—but we are seeing changes in the order of one or two percent. As the charts below show, the major volume increases are coming from conventional gas sources despite the fact that we see huge increases in unconventional gas production in the US and China. 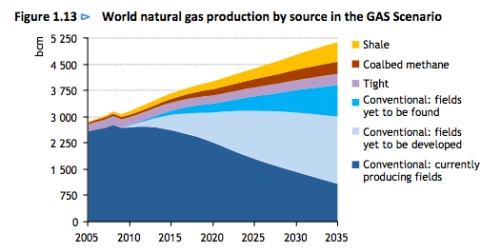 Unfortunately, it is an inconvenient truth that coal is a lot cheaper than gas in many key countries such as China, and a transformational change will only take place through a regulatory response. Furthermore, the idea promoted by Dieter Helm and other observers that oil and gas are fungible (close substitutes) is just not true.

Oil and gas have different attributes in terms of energy density, storability and transportability (as do coal, nuclear, hydro, wind and solar). To make gas vaguely fungible will require vast infrastructure investment and a decades long cycle of replacement of our current oil-orientated transport stock.

Nevertheless, let us say, for the sake of argument, that technological progress coupled with massive infrastructure investment solves the fungibility issue and allows gas to substitute for oil. This would, in turn, mean we would need a lot more shale gas if it is to significantly reduce oil’s share of total global energy demand. Indeed, we would need to see a monumental ramp up beyond anything projected to date. To reduce oil’s share by an additional one percentage point by 2030, say from 27% to 26%, would require 170 mtoe of replacement energy beyond that currently projected. The BP outlook currently sees North American shale gas providing around 550 mtoe by 2030 (up from about 150 mtoe now). So to get just one percentage less oil in the world energy mix, we would need to see nearly another 30% more US and Canadian shale gas production in 2030.

Against this background, the conclusion can only be that shale is important at the margin, but it is not a game changer. As such, the global economy will remain highly vulnerable to scarcity, security and environmental shocks for the foreseeable future, and anyone who discounts such risks through a religious belief in salvation from shale is just not on top of the numbers.

Like Loading...
This entry was posted in Peak Oil and tagged BP Energy Outlook 2030, Dieter Helm, fungibility between oil and gas, IEA, shale gas, The Golden Age of Gas. Bookmark the permalink.