For a politician, optimism sells. As a student of history, President Obama appears painfully aware that the tired-looking doom of Jimmy Carter turned off a whole generation of US voters.

In February 1977, two weeks into his presidency, Carter told the American people in a fireside chat that “we must face the fact that the energy shortage is permanent”. In April 1977, in another address to the nation, Carter’s opening words were “Tonight I want to have an unpleasant talk with you”. Carter then went on to talk about the potential of the energy crisis to “overwhelm us” and that if the country didn’t act on energy “the alternative may be a national catastrophe”. Over 30 years later, to hear a politician deliver such an unrelenting stream of bad news appears almost shocking.

Fast forward a mere seven year, and the Carter gloom had the character of a long-forgotten bad dream. Ronald Reagan played against it constantly, most blatantly in his “It’s morning again in America” campaign.

I am not quite sure why Carter was quite so down beat about the US energy outlook. By 1977, it was already known that a series of new sources of petroleum were about to come on stream, most of which were in geopolitically stable areas. That year, the Alaskan Prudhoe Bay oil field commenced production, Mexican oil production was also on the cusp of passing 1 million barrels of oil per day, and North Sea oil production had just vaulted over the same mark.

And then again there was the question of markets and prices. In 1977, the US oil market was highly regulated such that oil price rises did not translate into gasolene price hikes—and thus a change in consumption habits. At its most extreme, demand was controlled by the queue. Carter, in fact, did eventually come to understand this: his moves toward deregulation set the scene for the Reagan free market revolution that followed. Even that bastion of Austrian economics the Ludwig von Mises Institute recognises a debt to Carter (see here).

Nonetheless, because Carter ‘cried Wolf’  for so long and so loudly (and so wrongly), energy conucopians have been citing his administration as proof of the absurdity of the idea of resource constraints ever since.

And so we come to Barack Obama. In his January 24 State of the Union Address (full text here) we see this passage on energy and natural gas:

But with only 2 percent of the world’s oil reserves, oil isn’t enough.  This country needs an all-out, all-of-the-above strategy that develops every available source of American energy.  (Applause.)  A strategy that’s cleaner, cheaper, and full of new jobs.

We have a supply of natural gas that can last America nearly 100 years.  (Applause.)  And my administration will take every possible action to safely develop this energy.  Experts believe this will support more than 600,000 jobs by the end of the decade.  And I’m requiring all companies that drill for gas on public lands to disclose the chemicals they use.  (Applause.)  Because America will develop this resource without putting the health and safety of our citizens at risk.

The development of natural gas will create jobs and power trucks and factories that are cleaner and cheaper, proving that we don’t have to choose between our environment and our economy.  (Applause.)  And by the way, it was public research dollars, over the course of 30 years, that helped develop the technologies to extract all this natural gas out of shale rock –- reminding us that government support is critical in helping businesses get new energy ideas off the ground.  (Applause.)

Nearly 100 years supply of natural gas? Well that is a large supply—but is it true? Let us start by studying how much natural gas the US is currently consuming. Again, the democratic information commons that is the internet allows us to go straight to the original data when evaluating a political pronouncement. For consumption, let us go to the US government’s Energy Information Agency data (for where else would Obama get his numbers), and more particularly their early release Annual Energy Outlook published in January 2012. In this report, we find that the US consumed 24.1 trillion cubic feet (tcf) of natural gas in 2010.

For reserves and resources, the most respected source of reliable data is the Potential Gas Committee, which publishes a benchmark biennial assessment of the US technically recoverable US natural gas endowment. The last report came out in April 2011, and a summary can be found here and power point presentation covering the report here. The suggested gas supply available is shown in the chart below: 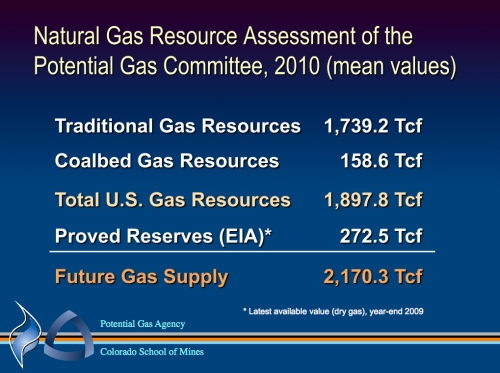 Now if we take the bottom-line number of 2,170.3 tcf of future gas supply and divide by the current consumption of 24.1 tcf, we get around 90 years. It is not 100 years, but close enough in political terms to give us a nice, round talking point for the State of the Union Address.

Next let’s look at the different categories of future gas supply. We have 272.5 tcf of proved reserves according to the EIA. These are known gas reserves that can be exploited with existing technology at existing prices.  The EIA provides a somewhere dated breakdown (as of 31 Dec 2008) here. For me, the most interesting part of this EIA analysis is that shale gas was still a relatively minor part of proved reserves as of 2009. The next update on proved gas reserves is due from the EIA in April 2012, and it will be very interesting to see how the steep decline in natural gas prices, coupled with the advance of technology and investment in the space, has altered the situation.

The Potential Gas Committee also provides a figure of 1.739.2 tcf for traditional gas resources (and please note that ‘traditional’  includes shale gas under their definition). Note the word ‘resource’  not  ‘reserve’. Resources (unlike EIA’s proved reserves) include gas that is a) as yet undiscovered, b) uneconomic to extract at present prices and c) cannot be extracted using current technology.

In addition, the PGC breaks down total resources to those that are probable, possible and speculative. Using these number, we can roughly see that we have 10 years current consumption of EIA proved reserves, 20 years of PGC probable, 30 years of possible, 20 years of speculative and 7 years of coal bed methane. So what are the PGC’s definitions for probable, possible, and speculative? The methodology behind these definitions is highly complex but a description can be found here. The key point is that as we move from proven, to probable, to possible to speculative the likelihood that the gas will actually reach the market diminishes.

Art Berman, a vocal critique of what he terms the shale bubble, emphasises that a large percentage of the PGC resources will never get reclassed as reserves. In his words:

Much of this total resource is in accumulations too small to be produced at any price, is inaccessible to drilling, or is too deep to recover economically.

Berman suggests that only half of the ‘probable’  resources will likely get upgraded to reserves, or around 275 tcf. Add this to the EIA’s 273 tcf and we have about 23 years worth of current consumption. A good summary of Berman’s view can be found here and a podcast here (start at 3:30). While that may be rather too pessimistic, the idea that all resources are equal appears hopelessly optimistic.

We most also remember that the president wasn’t content to keep natural gas consumption constant; he also said the following:

The development of natural gas will create jobs and power trucks and factories that are cleaner and cheaper, proving that we don’t have to choose between our environment and our economy.

Let’s just deconstruct this statement for a second. To ‘power trucks and factories that are cleaner’  requires natural gas to take market share from oil (since we currently aren’t powering trucks with either electricity or gas in any meaningful quantities at the current time), and to take market share from coal (since cleaner factories must mean factories powered by electricity generated from gas not coal). And if  ‘we don’t have to choose between our environment and our economy’  then I presume Obama believes the economy will grow, in which case gas consumption will rise regardless of whether it takes any energy market share from coal or oil. So the 100 years of supply makes no sense whatsoever if we premise it on a level of gas consumption that gives us cleaner factories and trucks (and all at a cheaper price).

In conclusion, my feeling is that President Obama’s spinning of irrational optimism presents a far greater danger than Carter’s morose pessimism. It may be politically impossible to sell the possibility of an energy crisis to the American people any more, but that does not mean the pipe dream of an endless stream of natural gas should be sold instead. I also think it is a politically naive strategy.

Like climate change, resource scarcity is not an ideology. If you wish, you may persuade someone that abortion is unethical, and little information will emerge to prove this view right or wrong. By contrast, if you tell the nation that a resource scarcity doesn’t exist, in due course the market will pass its own judgement through price (and ultimately availability). If that happens, even the most soaring of rhetoric will provide you with no place to hide.

4 responses to “Shale Gas (Part IV): Obama and the (Pipe) Dreams of Presidents”