There are five major global temperature time series: three land-based and two satellite-based. The most high profile satellite-based series is put together by the University of Alabama-Huntsville (UAH) and covers the period 1979 to the present. Like all these time series, the data is presented as an anomaly from the average, with the average in this case being the 30-year period from 1981 to 2010.

The official link to the data at UAH can be found here, but most months we get a sneak preview of the release via the climatologist Dr Roy Spencer at his blog here. Spencer, and his colleague John Christy at UAH, are noted climate skeptics. They are also highly qualified climate scientists, who believe that natural climate variability accounts for most of recent warming. If they are correct, then we should see some flattening or even reversal of the UAH temperature time series take place. To date, we haven’t (click for larger image): 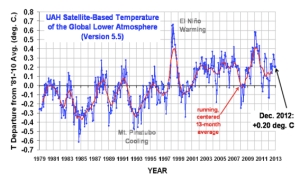 Spencer has also done us the service of ranking each year in order of temperature anomaly. The rank surely speaks for itself (click for larger image): we find the 1980s mostly at the bottom and the 2000s mostly at the top: 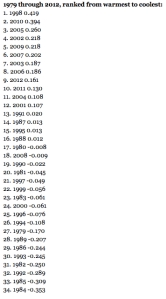 Also keep in mind that one of the initial reasons for publicising this satellite-based data series was due to concerns over the accuracy of terrestrial-based measurements (worries over the urban heat island effect and so on). The satellite data series have now been going long enough to compare the output directly with the surface-based measurements. Moreover, all the time series basically tell the same story (for a fuller mathematical treatment of this, see Tamino’s post at the Open Mind blog here).

Going back to Dr Spencer’s blog, a comment from John Christy is also highlighted when reporting the 2012 data:

While 2012 was only the ninth warmest year globally, it was the warmest year on record for both the contiguous 48 U.S. states and for the continental U.S., including Alaska. For the U.S., 2012 started with one of the three warmest Januaries in the 34-year record, saw a record-setting March heat wave, and stayed warm enough for the rest of the year to set a record.

So where do we go from here? I would hope that if the chart keeps showing a line rising up to the right—and old records keep getting broken—then Spencer and Christy will admit that their hypothesis is wrong. Unfortunately, my gut feeling is that they will take their opposition to the idea of significant anthropogenic global warming to the grave. The physicist Max Planck once said

A new scientific truth does not triumph by convincing its opponents and making them see the light, but rather because its opponents eventually die, and a new generation grows up that is familiar with it.

This is frequently paraphrased, rather cynically, as “science advances one funeral at a time”. It is unfortunate, however, that we just do not have the time to let opposition to action against climate change die off in a decade or two. By then, dangerous climate change will already be locked in.