Barry Ritholtz over at The Big Picture recently posted the chart below (click for larger image) detailing U.S. long-term interest rates (here). He then went on to draw the conclusion that it must be a golden time to make infrastructure investment at these yields. 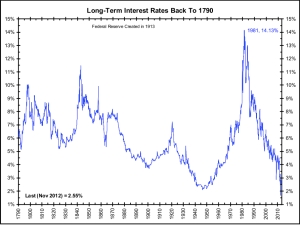 For myself, the chart calls forth an entirely different question: Why are long-term interest rates at their lowest level since the industrial revolution took off in America?

Deciding on the determinants of interest rates is a book-length topic, but I think most financial economists would agree that the long-term interest rate is composed of an expected inflation component, a required real risk free return (a bribe to get you to forego current consumption) and a return to compensate for the opportunity cost of not investing in a more risky asset.

Looking at the chart, the inflationary threat from the Federal Reserve printing massive quantities of money surprisingly appears a paper tiger.  Nonetheless, we have a little bit of inflation now, which indeed gives us a negative real rate of return for shorter rates. Could it be that investors get a positive rate of return over the longer term because prices actually start to fall? Given that the Fed has already shown itself ready to buy all and everything to ward off deflation, this seems unlikely.

So if we assume that our ‘little bit of inflation’ continues (and we really only need a little bit to bring the real long-term return down close to zero) , then is the collapse in interest rates due to something else?

My own personal opinion is that both the other components of the long-term rate are undergoing significant structural change. First, I think some households are realising that they are going to have a terrible struggle locking in future income, particularly after retirement. The factors behind this include:

At its most extreme, I think individuals become willing to pay to lock in future consumption rather than get-paid to forego current consumption. (Yes, there is a lower bound since you can put your cash under the mattress, but this doesn’t protect you from inflation should it arise; moreover, inflation-protected bonds—TIPS in the US—do suggest investors are happy to get a close-to-negative return.)

Turning to the opportunity cost, no-one forces pensions funds, insurance companies or individuals to buy long-term government bonds. All these actors can choose to invest instead in private-sector bonds and equities. But they aren’t doing this. Why? Obviously, the additional return investors could get from assuming the risk of buying into an investment that is not backed by the government is not deemed sufficient. But with interest rates so low, why aren’t private sector companies bidding money away from the government by nudging up returns?

I think there are two reasons for this. First, the productivity led growth that does exist in the economy today is not capital intensive—it is knowledge intensive. Yes, Google may be building extensive server farms to further cloud-computing, but they are nothing compared with the types of investment required in previous generations of technology-driven change. So Google just doesn’t need the cash, unlike, say, General Motors back in the 1950s.

Second, resource depletion is driving up costs even as technology desperately tries to drive them down. For example, for all the talk of shale oil, the average price for benchmark Brent oil hit a new high in 2012. And within the aggregate output, you are seeing high-production-cost unconventional oil replacing low-production-cost traditional oil (that is being depleted). For Shell to explore for oil in the Arctic circle, it needs to keep its cost of capital down (since all its other costs are going up on such an inhospitable environment), while investors see a literal sea of risk. Therefore, capital-raising by Shell is constrained.

At the same time, higher resource costs are working their way through the cost structures of a range of secondary industries worldwide.

Overall, the growth outlook is struggling; and with lacklustre to zero growth, we lose the ability to secure a decent long-term real return on investment. As such, I wouldn’t assume that the collapse in long-term rates is an anomaly. From a risk, perspective, assume that low returns are here to stay when planning one’s financial future.

Like Loading...
This entry was posted in Uncategorized and tagged Barry Ritholtz, End of growth, Long term interest rates, The Big Picture. Bookmark the permalink.