The U.S. federal agency the National Oceanic and Atmospheric Administration (NOAA) released its State of the Climate National Overview on 8 January 2012. This document declared 2012 the hottest year over the recorded period (1895 to 2012). The chart below shows temperature records on a statewide basis (click for larger image). 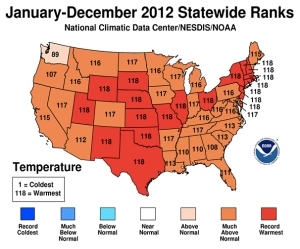 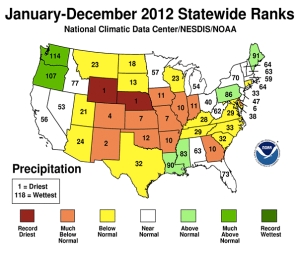 Within the climate skeptic fraternity, there have been many claims that the U.S. has stopped warming. Tamino at his Open Mind blog has a post (here) showing such claims are nonsense even if we exclude 2012. 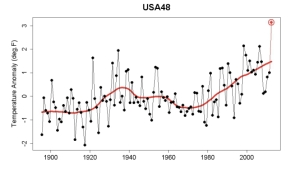 Finally, 2012 was the second worst year for extreme events (temperature, drought, precipitation and tropical storms/hurricanes making landfall) according to NOAA, only beaten by 1998. 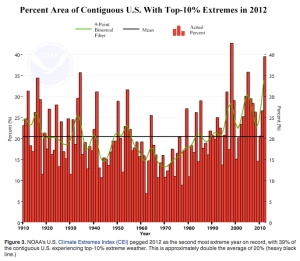 Note that Sandy was not counted as an extreme event in 2012 under NOAA methodology since when it made landfall it was no longer a hurricane. Jeff Masters has an excellent post covering 2012 climate and weather at Weather Underground here. In particular, he notes that the extent of drought in 2012 in the U.S. is unmatched since the dust bowl of the 1930s.