The number one climate surprise for 2012 was the unprecedented decline in Arctic sea ice extent. The shock, for me, was the extent to which the models tracked by the Intergovernmental Panel on Climate Change (IPCC) have failed to forecast the pace of decline (see my post here). The IPCC is frequently accused of alarmism in its climate predictions. A much more accurate criticism would be to accuse it of excessive conservatism and an underplaying of risk.

The direct impact of Arctic sea ice decline on humanity is limited (even if it isn’t limited for the Arctic circle flora and fauna). Indeed, in what I see as a breathtaking piece of short-sightedness by the human race, summer ice free Arctic is being viewed as an opportunity to drill for oil in virgin territory. Unfortunately, there exist a number of indirect impacts from less Arctic ice, including a loss of reflectivity to sunlight (the albedo effect). So warming begets warming.

If sea ice is retreating, it would appear logical to expect land-based snow cover to also decline over time in northern latitudes. NASA, among others, collects the data and has an excellent animation showing the seasonal shift in snow from February 2000 to November 2012 here. A snap shot of what June 2012 snow cover looked like can be seen in this chart (click for larger image): 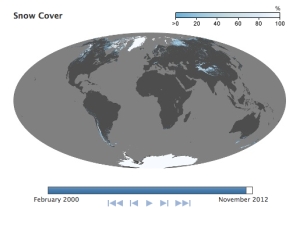 In a foreboding development that another domino is falling faster than expected, NASA yesterday reported (here) that June snow cover is declining substantially (click chart for larger image)—down around 50% from 1970 levels.

Critically, the authors of the original study are seeing the pace of snow cover loss accelerating beyond their expectations:

The snow-cover study authors, Chris Derksen and Ross Brown, found an overall decline in snow cover from 1967 through 2012, and also detected an acceleration of snow loss after the year 2003. Between June 2008 and June 2012, North America experienced three record-low snow cover extents. In Eurasia, each successive June from 2008 to 2012 set a new record for the lowest snow cover extent yet recorded for that month.

Previous research identified a link between rising air temperatures and shrinking snow cover, so Derksen and Brown were not surprised to see an overall loss of snow, “But we were surprised at the continued broken records of June Arctic snow cover extent over the past five years,” says Brown. “Arctic spring snow cover typically fluctuates over cycles of about three to four years so you don’t expect to see sequences of decreasing snow cover persisting through these natural cycles.”

The third domino to fall in this unpleasant sequence of events would relate to permafrost thaw. Should melting permafrost accelerate beyond the prediction of current models, then we would have to contend with another source of methane and CO2 emissions. Thankfully, there is no concrete evidence of a quantifiable jump in such emissions yet. I stress the word “yet” since a decade ago we were relatively sanguine about sea ice and snow cover retreat rates. Of course, should permafrost-related emissions rise, this would lead to yet more warming—giving another kick to an existing feedback cycle.

All of this goes to show that claims of climate scientists being “alarmist” are absurd: the surprises have been nearly all bad. In other words, from a risk perspective, the negative probability tail keeps fattening. Basically, that means you should give more credence to potential bad outcomes, not less.