On January 15, NASA’s Goddard Institute of Space Studies (GISS) announced temperature data for 2012 (slightly later than usual as GISS has been experiencing some web site problems—guess nobody is immune from these).

The year 2012 has been officially pegged as the ninth hottest since 1880, with a temperature anomaly (difference) of 0.56 degrees Celsius over the 1951-1980 base period. Below I have ranked the top 20 hottest years in the 1880 to 2012 period (click for larger image). As you can see, recent years dominate the ranking and the oldest year to make the cut is 1988. 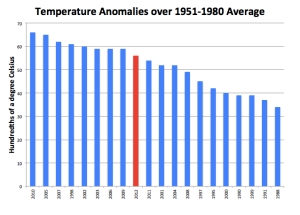 The raw data can be found in the GISS table here. I find it hard to believe that anyone of sane mind could 1) go into that table, 2) fix on the AnnMean (J-D) column (referring to the annual mean temperature for the January to December period) two-thirds of the way across the table, 3) scroll up and down the table and 4) still not believe in global warming.

I already flagged the release of the UAH satellite data series earlier in the month (here). The UAH data release is a lot more timely than NASA’s GISS series, but has the the drawback of only going back to 1979.

Once upon a time, “climate skeptics” questioned the accuracy of terrestrial-based measurements (worries over the urban heat island effect and so on) including NASA’s GISS series above. The satellite data series have now been going long enough to compare the output directly with the surface-based measurements. All the time series tell basically the same story (see Tamino’s post at the Open Mind blog here for the math behind this).

If you want to get a better sense of climate change across time, then I recommend you check out the animated graphic of yearly temperature anomalies from 1880 to date. It can be found within NASA’s news release here.