Back in 2009, I was having a long lunch with a banking analyst in Tokyo. Somehow, the topic of climate change was raised. My luncheon companion, an American, suddenly came out with the following comment:

Of course, I don’t believe in global warming; I’m a Republican.

I almost fell off my chair. To me, climate change is a subject like Newtonian physics or plate tectonics—in other words, not appropriate for political categorisation. It was then that I realised that climate change was becoming a so called wedge issue in the U.S.: a key determiner of one’s political allegiance.

The transformation has been swift. The Republican Party’s platform of 2008 included a whole section on “Addressing Climate Change Responsibly” within a chapter entitled “Environmental Protection”. It contained these words:

The same human economic activity that has brought freedom and opportunity to billions has also increased the amount of carbon in the atmosphere. While the scope and longterm consequences of this are the subject of ongoing scientific research, common sense dictates that the United States should take measured and reasonable steps today to reduce any impact on the environment. Those steps, if consistent with our global competitiveness will also be good for our national security, our energy independence, and our economy.

A Washington Post article contrasts and compares this approach with the 2012 platform:

The GOP platform takes a markedly different tone. That section devoted to climate change? Gone. Instead, the platform flatly opposes ”any and all cap and trade legislation” to curtail greenhouse gases. It demands that Congress “take quick action to prohibit the EPA from moving forward with new greenhouse gas regulations.” It criticizes the Obama administration’s National Security Strategy for ”elevat[ing] ‘climate change’ to the level of a ‘severe threat’ equivalent to foreign aggression.”

The rise in influence of the Tea Party, in particular, has made the support of climate change action a sure-fire way to end one’s political career (see, for example, here). Only one of the Republican 2012 presidential candidates expressed a belief in anthropogenic climate change (here), and Mitt Romney ridiculed President Obama on action to limit sea level rise during his acceptance speech at the Republican convention in Florida:

President Obama promised to slow the rise of the oceans and to heal the planet. My promise … is to help you and your family.

Unfortunately for the Republicans, climate change is different from such wedge issues as abortion, gun control and the size of government. Facts will eventually lead to refutation or confirmation. In short, given repeated experience of drought, flood or other extreme weather events, the vast majority of people will come to believe in the veracity of global warming.

Since we are only in the foothills of climate change, the number of extreme weather events that have no precedent—such as Hurricane Sandy—has been limited up to now. But such events are starting to arrive with sufficient rapidity to move opinion polls.

The most authoritative poll on climate change perspectives is conducted by the PEW Research Centre and is carried out on an annual basis. Full details of the poll are here. After a dip in belief in 2009 which coincided with a veritable blizzard of right-wing think tank spin aiming to discredit the anthropogenic global warming science, support for the idea has been rising again in the face of the procession of extreme weather events.

And the uptrend has not been limited to Democrats: 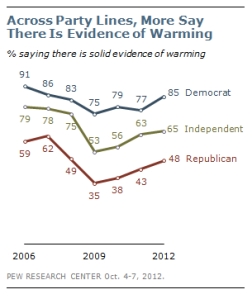 Note that the 2012 PEW poll was taken before Hurricane Sandy. Zogby Analytics, a polling organisation, captured the mood of Americans after Sandy in a poll taken in December 2012. John Zogby, the firm’s head, highlighted the mood change in a recent article for Forbes Magazine:

These results show the dramatic impact 2012′s extreme weather has had across party lines, with half of Republicans, 73 percent of independents and 82 percent of Democrats saying they’re worried about the growing cost and risks of extreme weather disasters fueled by climate change. It’s a major change from our December 2009 poll, which showed two-thirds of Republicans and nearly half of political independents saying they were ‘not at all concerned’ about global climate change and global warming. The political climate has shifted and members of Congress need to catch up with their constituents.

These constituents are not just individual voters but organisations that have generally been associated with the right such as the U.S. military. For example, the Department of Defence’s Quadrennial Defence Review Report contained a whole section on climate change (from page 84). The message could not be more explicit, and is completely at odds with the denialism within the Republican Party:

Assessments conducted by the intelligence community indicate that climate change could have significant geopolitical impacts around the world, contributing to poverty, environmental degradation, and the further weakening of fragile governments. Climate change will contribute to food and water scarcity, will increase the spread of disease, and may spur or exacerbate mass migration.

In sum, by positioning itself on the wrong side of history through adopting a climate “skeptic” stance, the Republican Party is doing itself considerable political harm. And there will be nowhere to hide: the U.S. military recognises the threat, and so does an increasing proportion of the American people. When will the Republican Party join them?

Like Loading...
This entry was posted in Climate Change and tagged climate change, John Zogby, The Republican Party. Bookmark the permalink.