Risk, Sensitivity and Sifting the Studies

Global warming? How bad could it get? Of course, with all of us being knowledgable about risk, we understand that this is really a question of probability multiplied by effect (that, in turn, means probable-but-quite-bad stuff happening all the way through to possible-but-bloody-awful stuff happening).

But lets chunk that up into three manageable variables: 1) how much CO2 we are throwing up into the atmosphere, 2) how much warming that CO2 is creating, and 3) how much damage the warming is causing.

This gives anyone of a “skeptical” disposition  three lines of attack: 1) dispute the trajectory of fossil fuel emissions, 2) uncover academic papers that suggest a low climate temperature sensitivity to CO2 or 3) welcome the warmer world as being beneficial to mankind.

Out of the primeval swamp that is the blogosphere, a Darwinian struggle has led to two sites emerging triumphant (one on either side of the Atlantic) as the alpha male climate “skeptic” clearing houses. From the U.S., we have Watts Up With That, and from the U.K. Bishop’s Hill. If you read any article bashing climate change, it is a good bet that the columnist or journalist sourced it from one of these two.

Not surprising, therefore, that both blogs have jumped on an as-yet-unpublished study by Norwegian researchers stating that climate sensitivity to a doubling of CO2 is as low as 1.9 °C (see here and here).

As a non-scientist but a student of risk, I suggest a three-step approach to any claim that here is little or no risk from climate change, and I use the Norwegian study as an example of this process.

1) What Does the IPCC’s Summary for Policy Makers Say?

This Intergovernmental Panel on Climate Change (IPCC) document can be found here, is only 18 pages long and is written in non-technical language. Further, the chapter rarely does not give some kind of context to a question (or a reference to the body of the report where an answer can be found). In this particular case, the relevant passage is here:

The equilibrium climate sensitivity is a measure of the climate system response to sustained radiative forcing. It is not a projection but is defined as the global average surface warming following a doubling of carbon dioxide concentrations. It is likely to be in the range 2°C to 4.5°C with a best estimate of about 3°C, and is very unlikely to be less than 1.5°C.

Note that the definition of “likely” is 66% in the IPCC report, so the 1.9°C number is not outside the band of existing IPCC estimates to any great degree.

Real climate is a blog written by climate scientists while What’s Up With That and Bishop’s Hill are not. To paraphrase the President of the Royal Society  Sir Paul Nurse on the predisposition of “skeptics” to rely on the evidence of scientists who are not climate scientists: you don’t go to a gynaecologist if you have lung cancer.

In the case of the study in question, Real Climate has published a post giving background on climate sensitivity.

In practice, people often mean different things when they talk about sensitivity. For instance, the sensitivity only including the fast feedbacks (e.g. ignoring land ice and vegetation), or the sensitivity of a particular class of climate model (e.g. the ‘Charney sensitivity’), or the sensitivity of the whole system except the carbon cycle (the Earth System Sensitivity), or the transient sensitivity tied to a specific date or period of time (i.e. the Transient Climate Response (TCR) to 1% increasing CO2 after 70 years). As you might expect, these are all different and care needs to be taken to define terms before comparing things.

And provides a helpful chart demonstrating that sensitivity is a function of time since different feedbacks operate at different speeds (click for larger image): 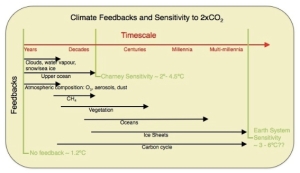 The post then goes on to suggest that a narrowing of the certainty range is unlikely to be achieved any time soon (accordingly, claims to the contrary should be treated with suspicion):

The bottom line is that climate sensitivity is uncertain, but we can pretty much rule out low values that would imply there is nothing to worry about. The possibility of high values will be much harder to rule out. This is something policy makers should recognize and confront.

Real Climate’s drawbacks are that it can be quite technical and hard-going for a non-specialist, is selective in its rebuttals and rebuttals frequently take considerable time to emerge.

3) What Does “Skeptical Science” Say?

Skeptical Science draws from a broader church of contributors than Real Climate (ie they are not all climate scientists) but, unlike What’s Up With That and Bishop’s Hill, it always references the scientific literature. Moreover, it is generally quite accessible to those who do not hold a science-based university degree and is very timely.

In a post that is a direct rebuttal of the Norwegian study (here), Skeptical Science make the valid point no single study will likely refute the current state of climate change science. The IPCC’s 2°C to 4.5° C likely range is based on multiple studies using different methodologies. In their words:

Perhaps the most comprehensive review of this research isKnutti and Hegerl (2008), which found that the various methodologies used to estimate climate sensitivity are generally consistent with the range of 2–4.5°C (Figure 1).

And the referenced Figure 1 is here (click for larger image):

The rest of the Skeptical Science post goes into the various technical deficiencies of the Norwegian study that you may follow up if you wish.

In conclusion, caution is required in any decision to downplay the risk of dangerous climate change. It is possible that climate sensitivity comes in at the low end at (say 1.5°C) as the IPCC openly admits, but it will take a lot more data and studies to make that call. But just as with a 1940s cigarette smoker, a lack of scientific certainty does not mean a lack of risk—nor does it provide a rationale for non-action. That smoker could have quit the habit in the 1940s and we can mitigate our carbon emissions now.