This blog broadly looks at three factors that could usher us into a post-growth world: climate change, resource depletion and diminishing returns to technology. Nonetheless, top-level data suggest that we have yet to arrive in this post-growth world.

As can be seen in the chart below (click for larger image), global GDP has been robust in recent decades, notwithstanding the slump in 2009. Advanced economy growth appears to be exhibiting a modest downward trend, but from an empirical standpoint it is too early to draw any firm conclusions.

Of course, GDP has numerous, and growing, limitations in its use as a yardstick for human well-being. In the presentation below, Andrew Simms, from the New Economics Foundation, looks at the problems of GDP-led models of human development in the light of climate change:

Nonetheless, we live in a world where GDP is used by the political, economic and financial elites to keep score. Those within the environmental movement may not like this situation, but it is what it is. As a result, I don’t believe that we will witness any significant reordering of the world economy to encompass sustainability concerns until we see a clear-and-present danger to GDP.

Where will the hit to GDP come from? Despite my general pessimism over how climate impacts will evolve, I don’t see global warming stomping on economic growth for a decade or so just yet. Jeremy Grantham in his recent Quarterly Letter entitled “Investing in a Lower Growth World” arrives at a back-of-the-envelope deduction of 0.1% of GDP per annum rising to 0.4% from now until 2030. This number is as good as any. The economic literature covering the damage function within economic models of climate change appears woefully thin and out of date.

If we do get to Grantham’s 0.4% by 2030, and presuming the business-as-usual CO2 emissions scenarios hold true, I would guess that the GDP impacts from climate change would rise exponentially until overall per annum growth reaches zero. You won’t find this in the economics literature, where impacts out to 2100 appear laughably (or cryingly) small. Unfortunately, for climate change, being the super wicked problem that it is, I expect any alteration to the current orthodoxy—that climate change is a second order threat to welfare (see an example of this kind of thinking here)—to be slow and incremental. Accordingly, by the time the economics profession starts flagging to policy-makers the grave threat to GDP posed by climate change, that threat will be locked in.

Ironically, I believe that the best hope for some kind of meaningful climate change mitigation lies with a hit to GDP from other sources, in particular resource depletion. Obviously, petroleum here is a primary concern. Yet we have seen a pretty stunning rise in real oil prices—a quadrupling from 1990 levels to be precise—but global growth has remained intact. 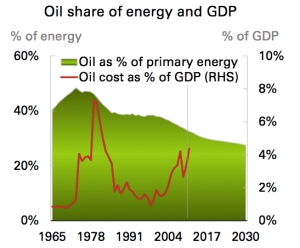 So, as economic orthodoxy would suggest, we have been substituting out of expensive oil to relatively inexpensive gas and coal as the oil price has risen. But this has come at a cost. As Grantham argues in his letter I flagged above, any increase in GDP related to resources is non welfare promoting.

Imagine an economy where one third of GDP is expended on securing energy and two thirds on goods and services. Now, let us say that due to resource constraints we need to spend two thirds of GDP on energy and only spend one third of GDP on goods and services. Further, we can envisage a situation where GDP remains flat between the two economic states. In such a case, actual welfare-enhancing GDP halves! This is the gist of Grantham’s argument.

So if we live in a world where we only worship the headline GDP rate, much as we do now, we can pretend that all is well even as we become ever-more impoverished.

Nonetheless, a recent paper by the IMF also sets out a variety of scenarios where we cease to cope well with rising oil prices even in respect of headline GDP. At the core of their analysis is a recognition that geological constraints, basically peak oil theory, force price to shoulder an ever-heavier burden in drawing out unconventional supply or prompting a substitution away from oil.  Their baseline scenario sees the price of oil rising to $200 over a 20-year period. Real GDP growth, meanwhile, would be around 4% below trend at the end of 20 years in the U.S. and Euro Area and 8% below trend in the rest of the world excluding the oil exporters. In per annum terms, we would be knocking less than 0.5% of growth. Bad, but not the end of the world as we know it.

In comparison with this baseline, a number of negative scenarios are considered including 1) a larger peak oil constraint, 2) rising difficulties in substituting out of oil as time passes by and 3) a growing inability to use certain existing technologies when the price of oil gets too high (which they call the technology externality scenario). Some of these scenarios are then laid on top of one another, with the result that drastic oil price rises of $1,000 dollars and GDP falls of 50% against trend can be produced. The paper itself is quite hard to follow if you don’t have any economics training, but the figures at the back set out a series of charts corresponding to each scenario, or combination of scenarios, and are pretty much self-explanatory. Alternatively, look at this presentation by Kumhof on the IMF’s work to an audience of non-economists here. In short, the IMF show a logical path to how the world could go ex-growth.

Finally, the dynamic through which climate change will interact with resource constraints is fiendishly complicated. I previously blogged about this in a post called “The Conjoined Twins”. Enough to say that I don’t think you can stay abreast of the climate change question without following the peak oil debate, and vice versa.

2 responses to “World GDP: No Slowdown—Yet”