Two weeks ago, I posted on a new paper by Dr Anton Vaks and colleagues looking at permafrost thaw in the context of overall climate risk. In that post, I talked about a 1.5 degrees Celsius rise in global mean temperature from today setting off significant permafrost thaw and carbon release.

This is an important, and a very negative, correction—and it has massive risk implications. At the end of the post, I will explain why much of the media and blogosphere interpreted the paper incorrectly (including myself), but first I will look at the more important question of what a lower hurdle for permafrost thaw means.

Let’s start by reporting the relevant passages of the paper itself (note that the paper is behind a paywall):

We reconstruct the history of Siberian permafrost (and the aridity of the Gobi Desert) during the last ~500 kyr using U-Th dating of speleothems in six caves along a north- south transect in northern Asia from Eastern Siberia at 60.2°N to the Gobi Desert at 42.5°N.

Speleothems are mineral deposits formed when water seeps into a cave from surrounding bedrock and earth. If the surrounding bedrock and earth is frozen, you get no water seepage and no speleothem formation. So when an interglacial period reaches a sufficiently warm level, permafrost melts and speleothems form. U-Th dating refers to uranium-thorium dating that is accurate up to around 500,000 years.

The interglacials for the last 800,000 years can be seen in the following chart (not take from the paper, source here, click for larger image):

Most scientific papers refer to interglacials in terms of marine isotope stages (MIS). The two warmest in the chart above are MIS-5.5, the last interglacial before our own, and MIS-11, the warmest interglacial of the last 500,000 years—an interglacial period that took place between 374,000 and 424,000 years ago. Back to the paper:

MIS-11 was the warmest of recent interglacials, including the presence of boreal forest on South Greenland at that time (16), the absence of ice-rafted debris in the North Atlantic (17), increased sea levels (18), and higher sea-surface temperatures (SST) in the tropical Pacific (19–21).

The paper then goes on to state that sea surface temperatures (SST) of the Pacific Warm Pool (PWP) were over 1.5 °C warmer than the pre-industrial mean temperatures during this interglacial period:

This tropical heat was transported poleward (22) and there is evidence of unusual warmth in Siberia during MIS-11, evidenced by the high fraction of biogenic silica in the sediments of Lake Baikal (23) (Fig. 2C) and high spruce pollen content in Lake El’gygytgyn, suggesting local temperatures 4-5°C above present (24). When PWP temperatures reach 30°C this appears to cause more pronounced warming of northern continents, and lead to significant northward migration of the permafrost boundary.

I’ve already mentioned that MIS-11 refers to the warmest interglacial of the last 500,000 years. The MIS-5.5 interglacial took place around 125,000 years ago, and was slightly cooler than MIS-11 but around 0.5-1.0°C higher than pre-industrial global mean temperature—which is roughly where we are now temperature-wise or perhaps a little bit above. The final sentences of the paper give an explicit warning:
.

Warming of ~1.5°C (i.e., as in MIS-11) may cause a substantial thaw of continuous permafrost as far north as 60°N, and create wetter conditions in the Gobi Desert. Such warming is therefore expected to dramatically change the environment of continental Asia, and can potentially lead to substantial release of carbon trapped in the permafrost into the atmosphere.

.
Let’s recap. Based on the paper’s estimates, the permafrost regions of the northern hemisphere hold 1,700 billion tonnes of carbon. Separately, at any point in time, you can work out how much carbon is contained in the atmosphere based on the fact that one part per million (ppm) of CO2 is equivalent to 2.123 billion tonnes of carbon (this figure is taken from “The Global Carbon Budget 1959-2011“, page 1125).
.
The U.S. government agency the National Oceanic and Atmospheric Administration (NOAA) publishes atmospheric CO2 concentrations on a monthly basis here:
.

.
So multiplying 396.8 by 2.213 we get 842 billion tonnes of carbon in the atmosphere. Accordingly, carbon locked up in the permafrost is equivalent to around twice that contained in the atmosphere.
.
Turning to Myles Allen’s carbon budget work (which I have posted on before), we have already emitted 568 billion tonnes of carbon since the industrial revolution. Moreover, once we reach one trillion tonnes, we are likely committed to dangerous climate change of 2 degrees Celsius of warming from pre-industrial levels. The current level of emissions is given by Allen’s Oxford University backed web link here:
.

.
At this stage we should consider that the generally accepted pre-industrial revolution concentration of CO2 was 280 ppm. Going back to the fact that 1 ppm is equivalent to 2.123 billion tonnes carbon, then the total carbon in the atmosphere before the wholesale burning of fossil fuel was 616 billion tonnes of carbon. So subtracting the current level of carbon in the atmosphere, 842 billion tonnes, from the pre-industrial level, 616 billion tonnes, we can see carbon in the atmosphere has increased by 226 billion tonnes.
.
The difference between the 568 billion tonnes of carbon that has been emitted by mankind due to the burning of fossil fuels/land-use change and the increase of carbon in the atmosphere by 226 billion tonnes is due to the ocean and terrestrial land sinks; i.e., only 40% of carbon put up into the atmosphere by man actually stays there (the airborne fraction), the rest gets reabsorbed.
.
This takes us back to the paper by Vaks and colleagues. According to their research, there is evidence of permafrost thaw at latitudes around 52N to 55N during the last interglacial around 125 thousand years ago (MIS 5.5); and during the warmer and longer interglacial MIS 11, permafrost thaw took place at latitudes as high as 60.2°N.
.
This is bad news as it suggests that part of our remaining carbon budget of 442 billion tonnes of carbon (1 trillion minus 568 billion)—if we wish to stay within 2 degrees Celsius of warming from pre-industrial levels—will be taken up by carbon emitted due to permafrost thaw. This means that Allen’s estimate that the trillionth tonne will be emitted in 2041 on emission trends of the last 20 years is too optimistic. Further, to not release the trillionth tonne will require steeper immediate emissions falls than the 2.4% suggested below.
.

.
As a final thought, a chart at the back of the Vaks paper puts into perspective how extraordinary anthropogenic climate change will become when compared with previous natural climate fluctuations. In terms of CO2, temperature and so on, we will literally be off the chart by the end of this century.
. 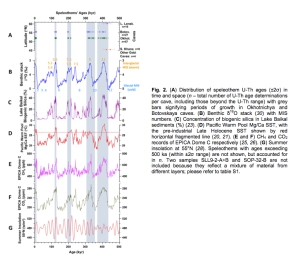 .
Note on Original Incorrect Reporting of Paper
.
I exchanged e-mails with Anton Vaks, the lead author of the paper, over the discrepancies between different interpretations of the paper. They originated from an incorrectly worded press release from Oxford University (which has since been corrected). Dr Vaks reiterated to me that we are talking about 1.5°C rise from pre-industrial levels giving rise to permafrost thaw in the northern hemisphere.
.
My original post was based on an article in the usually reliable Climate Central that contained these quotes (which have since been corrected after exchanges between myself and Michael Lemonick the author of the article):
.

If global average temperature were to rise another 2.5°F (1.5°C), say earth scientist Anton Vaks of Oxford University, and an international team of collaborators, permafrost across much of northern Canada and Siberia could start to weaken and decay.

At the time, global average temperatures were some 2.5°F warmer than they are today. That sort of temperature increase by itself wouldn’t make an enormous dent in the permafrost, but the Arctic is likely to warm faster than the rest of the globe — as in fact, it has already started to do.

Generally, I do a double check with the original paper, but this one was behind a pay wall, so I didn’t bother—a significant mistake. To cut a long story short, various other articles and posts popped up referencing the original paper that talked about a 1.5°C  (2.5°F) rise from pre-industrial temperature levels. At that point, I bought the original paper from Sciencexpress for $20 to try to find the definitive figure and then contacted Dr Anton Vaks directly for confirmation. Unfortunately, the correct interpretation of the paper is much more pessimistic for mankind.

2 responses to “Siberian Permafrost Thaw and Risk Revisited (and Corrected)”