Higher Education: Or Should I Just Keep Chasing Pavements?

And for those who don’t get the pop culture reference, ‘chasing pavements’ is the British singer Adele’s metaphor for a fruitless pursuit or forlorn hope.

Do we live in a different economic world? Or was the credit crisis of 2007-09 just an aberration: an anomalous blip on the way to future prosperity? It’s a taxing question for everyone, but especially those just starting adulthood and thinking of a future career.

The old certainty, pre-credit crisis, was that higher education was a reliable stairway to greater employability and higher income. But in the last couple of years, a sea of student debt and rising graduate unemployment have made many question whether past returns to education still hold.

On Monday, a disquieting NBER study by three Canadian economists entitled “The Great Reversal in the Demand for Skill and Cognitive Tasks” was published that suggests we have entered a ‘new normal’ for education too. From the Abstract:

….we argue that in about the year 2000, the demand for skill (or, more specifically, for cognitive tasks often associated with high educational skill) underwent a reversal. Many researchers have documented a strong, ongoing increase in the demand for skills in the decades leading up to 2000. In this paper, we document a decline in that demand in the years since 2000, even as the supply of high education workers continues to grow.

And if you think that wasn’t bad enough:

The paper starts with a sweep through the employment data that shows the worsening employment picture for all U.S. workers (click for larger image):

Nothing new here. Indeed, it gives me an excuse to put up Calculated Risk’s iconic  employment chart (click for larger image).

Note that the workforce continues to expand in the U.S. due to demographic trends, so the increasingly slow job recoveries from recessions translate into lower overall employment rates. What is new here, however, is that the paper’s authors argue that circa 2000 the demand for cognitive—aka high skilled, high education jobs—shrank. Worse, this coincided with an influx of highly educated new graduates who had been reared for years on the mantra (delivered by their parents, teachers and politicians of both the left and right) that staying on at college was the only way to get ahead. 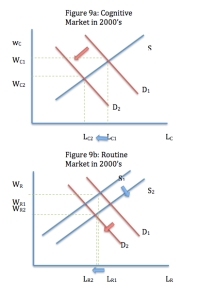 As a result wages fell, as did actual positions in the cognitive sector. Moreover, those who could not find cognitive jobs, even at the new, reduced wage levels, were forced down the skill ladder into the routine jobs category. The next chart is even more surprising for me, since it shows that even those graduates (with four years of college education) in the higher wage percentiles have not managed to insulate themselves from falling wages in the post-2000 period:

This interpretation of labour market trends is very different from the consensus, which emphasises the cyclical impact of the 2008 credit shock and subsequent recession as being the main driver of depressed employment. Moreover, the paper is keen to record the structural break in employment trends as 2000 not 2008:

Of course, the data doesn’t suggest that opting not to go to college is a valid employment strategy (although student debt also has to be added into the equation). College graduates have managed to go backward more slowly than their high-school educated counterparts at the very least, and a college education gives one non-monetary rewards. Nonetheless, I doubt many graduation ceremonies will feature Adele’s song as the background music to the keynote commencement address.

Like Loading...
This entry was posted in Post Growth and tagged declining returns to education, The great reversal in the demand for skill and cognitive tasks. Bookmark the permalink.

6 responses to “Higher Education: Or Should I Just Keep Chasing Pavements?”