Listening to all the eulogistic speeches since Thatcher’s death, one common thread from the right is the portrayal of the U.K. economy of the 1970s as one of stupor or worse. On the BBC, I heard one Tory grandee talk of how his American friends were offering to send food parcels in the late 1970s.

Yes, there was a three-day week for a few months—the candle-lit dinners being fantastic fun for my teenage self at the time. Moreover, we see the pictures of the dead not being buried and the refuge piling up—great stories all. But did people actually get poorer as the decade progressed?  For this is how believers in neoclassical economics (and Thatcher was one) like to keep score. Well, I guess the victors get to rewrite history. But let us for the sake of balance actually look at the numbers.

I’ve quickly put together a couple of charts that compare the 1970s (1970-79) and 1980s (1980-89) to give us quick and dirty comparison of the two decades (data taken from the Bank of England’s Three Centuries of Data spreadsheet here, click for larger image): 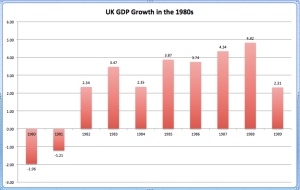 In the top graph we should note that the 1973/74 recession was due to an external shock: the 1973 Arab oil embargo. Yet despite the surge in oil prices, GDP growth never shrank by greater than 1%. By contrast, the same data set three decades later shows 2009 real GDP shrinking by just under 5%. And this was not due to an external shock but rather a monetary and deregulation-induced asset bubble (one of the greatest own goals in history).

We should also not forget the impact of North Sea oil (first promoted by Labour’s Harold Wilson), a positive external shock of the highest magnitude. While Thatcher may have been smart, she was also lucky, coming to power on a rising wave of oil production. This freed her from the one constraint that was the bane of previous governments (whether of the left or right): balance of payments crises. Oil revenue also meant that she could cut taxes without slashing public expenditure. And, indeed, despite her small government aura, public spending as a percentage of GDP never fell during her time in power. It is a happy politician who has her cake and gets to eat it. 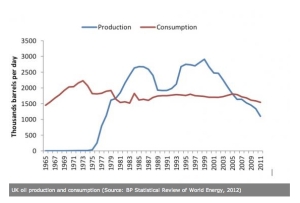 So spare a thought for David Cameron. He inherits a big government that is a direct baton pass from Thatcher, to Major, to Blair, to Brown to him. North Sea oil revenues have slumped ,and the days of 1970s style balance of payments crises lurk on the horizon. What is more, 1970s’ style underlying technology-induced productivity-led potential growth of 2% or so per annum is a distant memory. These are bad cards with which to play a hand; Thatcher would have done no better.

Finally, I hope the comparison of the pre-Thatcher revolution era to post-Thatcher revolution era highlights just how difficult it is for a government to promote growth. In short, much of growth comes from deep underlying sources within an economy; for example, energy and technological progress. When compared with such forces, monetary, fiscal and market structure initiatives play a far smaller role than one would expect.