The Absurdity of ‘Abenomics’ and the PM’s ‘Three Bendy Arrows’ (Part 1: What Is He Trying to Achieve?)

Although Japan has been eclipsed by the European southern periphery for the title of the world’s foremost post-growth economy, it still matters for its sheer economic size  (currently number three in the world behind the U.S. and China). However, despite sneers over Japan’s lost decade (or decades), the country has managed its decline rather well.

True, its outlying prefectures are peppered with depopulated and dilapidated towns and villages (beautifully chronicled in the past by Richard Hendy in Spike Japan), but there is none of the social implosion of, say, a Detroit or an Athens. Moreover, the Anglo-Saxon sniggers appear increasingly misplaced since the credit crisis hit, at which time the ephemeral nature of growth was recognised throughout the OECD.

Nonetheless, the election of Shinzo Abe in December 2012 has given rise to a resurrected style of evangelical “yes we can” style of politics (for veterans of Japan, we have been here before with Hosokawa and Koizumi). My preferred reply to Abe’s exultation would be this: “no, we can’t”, supplemented by “why are we even trying?”

So what exactly is Prime Minister Abe trying to do, especially as it has already been honoured with its own name: ‘Abenomics’. If you want to get an overview of Abenomics, you can find a short four-minute video on the subject from The Financial Times here.

First and foremost, he wants to invigorate growth (as a philosophy, this is about as novel as wanting peace on earth) through a ‘three arrows’ agenda of monetary stimulus, fiscal stimulus and structural reform . Quite why he wants more growth is never really explained. Perhaps it will help reduce government debt. But government debt is an intermediate outcome. How many people wake up in the middle of the night and say to a partner “I can’t sleep darling, I am so worried about the government’s debt.”

What people really worry over is whether they 1) can buy stuff such as food, housing and toys (like iphones, SUVs and foreign holidays), in accordance with their expectations 2)  are healthy, 3) have status (which starts by having a job), 4) have agency (which means the ability to have some degree of control over one’s job, environment and life outcomes, 5) have a partner, 6) have friends, 7) feel part of a broad, safe community,  8) get enough sex, again in accordance with expectations, and 9) have thriving children (for parents).

When Abe says, in all his munificence, that he wants to bestow on the people of Japan the gift of growth, he is saying that this gift will make people happy. But he is not saying through which avenue of growth this happiness will be attained. Will raising Japan’s long-term potential rate of growth provide people with enough sex to fulfil their expectations (a sure fire way to make people more happy)? I doubt it. Will it allow them to make new, close friends? You get my drift.

But hang on, you say, it will give them more toys! Perhaps. But then we are in a situation of who gets the toys and whether in the process of getting more toys the actions taken impair some of the other variables relating to happiness. I will come back to this point when I look at Mr. Abe’s ‘three bendy arrows’ agenda in more detail (in a later post).

So putting aside the question of whether growth will actually make the people of Japan happier, the next question is whether Abenomics can achieve the wished-for growth? To answer this question, let’s start by sneaking into the hallowed halls of the Bank of Japan (something I also used to do 20 plus years ago when I edited some of the most boring reports known to mankind). In his quest for the Holy Grail of growth, Prime Minister Abe has appointed a punditry applauded New Model Central Banker (NMCB), Haruhiko Kuroda. I, however, personally pine for his dull, dour predecessor Maasaki Shirakawa. Why?

Now Shirakawa never said that growth was not a good thing to strive for. See this statement from his final speech as Bank of Japan governor, given to the Japan Business Federation.

Personally, I believe that in response to the request “Please sir, can I have some growth?” Shirakawa should have been more honest and given this reply:

No, tough shit, you are not going to get any growth, so there.

And in so doing, he could have conveyed the more meaningful message:

Rather than pursue something you can’t have, why don’t you all move on and do something more useful with your lives—something that will actually make you more happy.

Why do I say this? Because at the back of almost every Shirakawa speech is a set of charts clearly demonstrating that there is no growth to be had. As an example, I will plunder Shirakawa’s chart book from his last speech (given in February 2013) because the numbers are up-to-date. Many if not most of his speeches, however, have similar slides, so it doesn’t really matter which speech you pick.

First, we see that Japan’s growth rate has wilted over the last few decades:

And this has been driven by declining productivity and poor demographics. 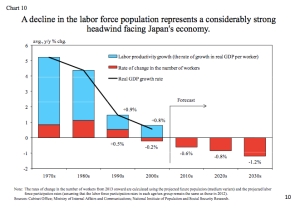 We also note that Japan’s productivity is not that bad in comparison with other major OECD countries. 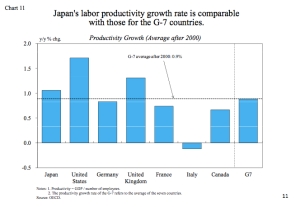 Further, if we compare Japan’s record on a like-for-like basis with other economies—that is, correcting for the impact of demographics—then employee-adjusted GDP looks perfectly respectable: 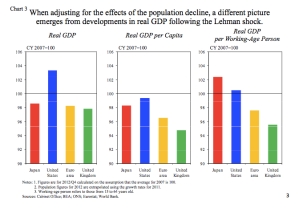 And just to remind ourselves, I will show a chart from a Japanese Ministry of Health, Labour and Welfare (MHLW) presentation that demonstrates just how bad the demographics will get:

After this short series of charts, we know exactly what Prime Minister Abe’s  ‘three bendy arrow’ policy agenda is seeking to achieve. He is seeking to overcome a roughly 1% per annum drag on growth from fixed demographics. So to get 1% real GDP growth, his ‘three bendy arrows’ will need to double productivity growth; and to get 2% real GDP growth, they will need to treble productivity growth. Also, he is aiming to do this at a time when all the OECD countries have seen decadal declines in productivity, and not one advanced country is consistently recording 2% plus rates of productivity growth in the current climate.

I will argue in my next post that the achievement of such huge jumps in productivity growth are an impossibility. What is more, in trying to attain what cannot be attained, Abe risks setting off a range of unintended consequences that could harm happiness, and, counterintuitively, whatever economic stability Japan has been able to achieve in recent decades.