Crude oil is a globally traded commodity, and U.S. production numbers need to be placed in the context of world supply and demand. In its April 2013 Oil Market Report, the International Energy Agency (IEA)  records global ‘all liquids’ production as averaging 90.6 million bpd in Q1 2013, flat over the same period the previous year.

For March 2013, global supply was 90.7 million bpd (here). Over the last 3 months, rises in non-OPEC supplies have been offset by falls within OPEC. The degree to which this is due to supply constraints or deliberate production cuts by Saudi Arabia to maintain the oil price above $100 per barrel in the face of a slowing global economy is difficult to tell. 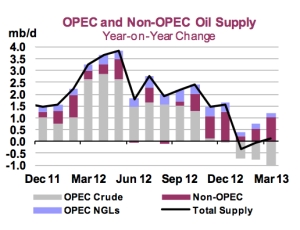 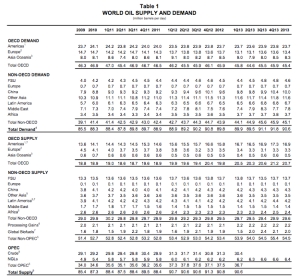 Like Loading...
This entry was posted in Peak Oil and tagged all liquids production, EIA, IEA. Bookmark the permalink.