As can be seen from the chart below (click for larger image, link to original data here), the fracking of tight oil formations in the U.S. has made a significant impact on U.S. crude production. The critical question is whether the current large year-on-year percentage growth rates in oil production can be sustained (click for larger image). The year-on-year increase in production peaked in October 2013 at 18.2% (compared with 13.0% for March 2013).

Given crude oil is a globally traded commodity, U.S. production numbers need to be placed in the context of world supply and demand. In its latest Oil Market Report, the International Energy Agency (IEA) recorded global ‘all liquids’ production as averaging 90.9 million bpd in Q1 2013, flat over the same period the previous year. 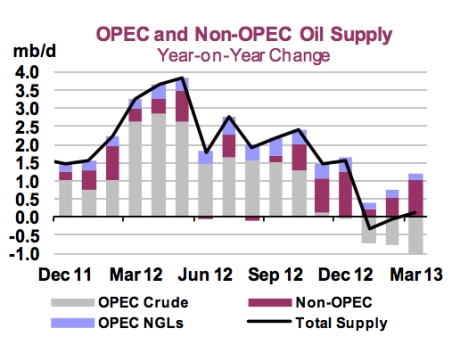