The U.S. government agency The Energy Information Administration (EIA) issues data on U.S. natural gas production, including shale gas, on a monthly basis with a lag of roughly two months. The latest data release was made on August 30 and covers the period up until end June 2013.

Since the end of 2011, the rate of production increase has rapidly decreased (click chart below for larger image) and on current trend should go negative over the next few months. 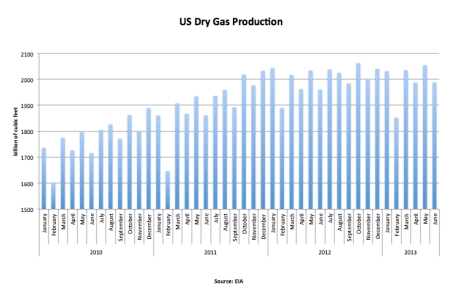 The rapid deceleration in natural gas production growth has led to an uptick in prices over the last 12 months. Prices paid by electricity utilities have now reverted to between $4 and $5 dollars per thousand cubic feet from a low of less than $3 in April 2012. At some stage, rising prices should lead to a further investment in shale gas production, but this has yet to be seen.

Much recent media attention has centred on a so-called shale-gas revolution in the United States and, in particular, the ability of shale gas to boost overall volume of natural gas production. Many claims are made with respect to the prospective expansion in shale gas production in the coming years including the following:

I have blogged extensively on these claims (some repeated by President Obama) here, here, here and here.

For these claims to be substantiated, significant year-on-year rises in U.S. natural  gas production will be required over an extended period. Through tracking monthly production of natural gas, a non-specialist can confirm or refute whether large rises in natural gas production are being achieved and, therefore, whether the claims associated with a shale-gas revolution are credible. In short, the monthly numbers allow you to evaluate the hype. Monthly data are currently not showing any material increase in production.