What has changed? I would cite four main factors: 1) the Great Recession, 2) the coordinated and well-financed campaign of climate scepticism, 3) the hiatus in temperature rise and, last but not least, 4) climate change fatigue. I further suspect that even if 1) through 3) had not occurred, 4) alone would have been sufficient to break the momentum of any action to mitigate climate change.

So why can’t we keep our concentration in the face of what must be the greatest threat faced by humanity in the last 10,000 years? Perhaps because the lag between cause and effect, which in the case of climate change is measured in decades rather than years, is just too big.

In the past, I believed that life insurance offered some hope as a role model for evaluating long-horizon risks since the industry is built on individuals evaluating outcomes decades into the future. But in the case of life insurance, individuals can take a rough stab at the distribution of future risk by looking at the distribution of current risk.

A twenty-something woman with young children knows that there is an outside chance that she (or her partner) could die due to a heart attack, stroke or cancer in her thirties or forties. Why? Because out of the few hundred friends and acquaintances that she has come into contact with over the years, she probably knows, either directly or indirectly, more than one person who has died young. In short, life insurance mells well with an individual’s personal life narrative.

But climate change doesn’t. The risk is abstract to the extent that it has no connection with the life experience of most people. Even the burning embers diagram of the Third Assessment Report (TAR) of 2001 does a poor job of communicating risk (and even this was excluded from AR4 for political reasons as you can read here), since it is just a representation of broad categories of risk and not based on experiences that individuals can internalise:

Therefore, while the decadal unit of measurement is most appropriate for measuring the extent and effects of anthropogenic global warming (AGW), it appears too long for social and political action to coalesce. Yet AGW is moving at lightening speed when compared with natural climate change.

The climate scientist Stefan Rahmstorf, writing in the scientist-led blog Real Climate, highlights a recent paper by Marcott et al in Science that reconstructs the global temperature record back over the last 11,000 years. This period, termed the Holocene, encompasses the years since the last glacial period ended, which is broadly commensurate with the rise of human civilisation. 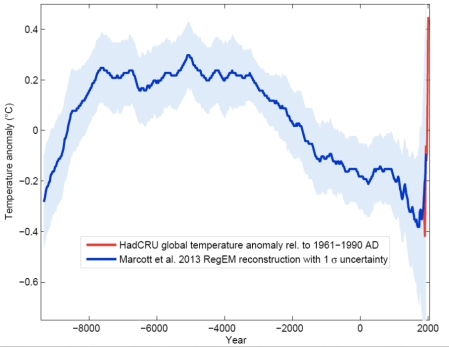 As you can see, we were merrily moving in slow motion toward a new ice age when we started to burn fossil fuels. Rahmstorf then kindly provides us with a chart that adds the back story of temperature during the last ice age plus the IPCC’s central estimate of temperature out to 2100 based on the most likely fossil fuel emission trajectory. The step change is obvious, but is still not fast enough to impact on the future expectations of voters. 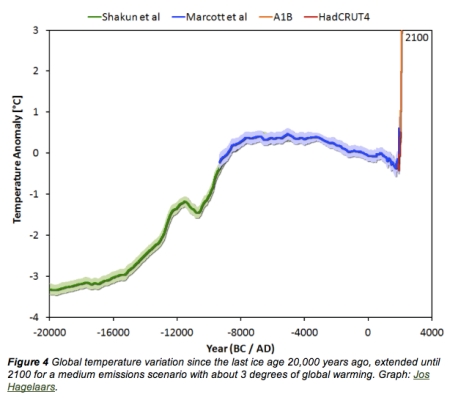 With no urge to mitigate emissions visible within the broader population, we appear to be reduced to praying a) that climate sensitivity to a CO2 will come in at the low end of estimates, and b) that this will give us sufficient time for a backstop non fossil-fuel energy technology to be developed and scaled up before extremely dangerous climate change is locked in.

This is a pure, high-stakes gamble: if we don’t get lucky with sensitivity and technology, we are left with a horrendous pay-off in terms of negative climate change effects. Unfortunately, no means of conveying this threat in a way that meshes with the life narratives of ordinary individuals appears to exist.

Like Loading...
This entry was posted in Climate Change and tagged AR5, burning embers, IPCC, Stefan Rahmstorf. Bookmark the permalink.

3 responses to “The New IPCC Report and Climate Change Fatigue”