Tom Dolphin, senior economist at the Institute for Public Policy Research, has a Briefing Paper out on the UK’s unbalanced economy which contains a number of charts that give pause for thought.

His thesis is that the UK is experiencing the wrong type of growth: growth that is both unsustainable and ‘bittersweet’ in the sense that it benefits only a small portion of Britain’s population. He is particularly concerned over the UK’s dire track record with respect to investment as evidenced by the chart below (click for larger image):

In short, as a percentage of GDP, UK investment has trailed, and continues to trail, all its advanced-country peers. Moreover, since the Great Recession, investment has been moribund despite George Osborne unveiling of the “march of the makers” in his 2011 budget (click for larger image). 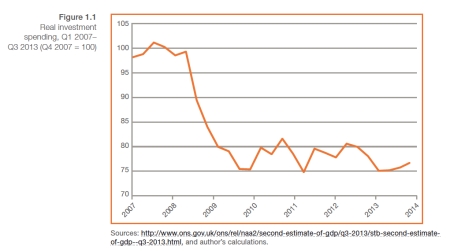 With an election looming, Dolphin believes that the coalition has been forced to stoke up a housing led consumption boom, through such measures as Buy to Let, in order to buttress growth. Accordingly, UK households are leveraging themselves up again to levels not seen since before the crisis (click for larger image):

Dolphin doesn’t mention the Bank of England’s role in stoking up a new housing bubble, but nonetheless I believe he is correct in terming the recovery ‘bittersweet’ and blaming the government for not carrying through more forward-thinking policies.

Indeed, households are experiencing stagnant or declining real incomes yet are piling on debt back again; the current account deficit remains entrenched, creating the need to finance it by selling off assets to foreigners (most ownership of central London prime housing appears to have already gone abroad); employment has declined but is still far higher than before the crisis; and the new jobs are far more insecure and carry less benefits than those that disappeared in the Great Depression. Welcome to the new normal.