The anomaly refers to the difference between the current temperature reading and the average reading for the period 1981 to 2010 as per satellite measurements.

This is the joint 7th warmest March temperature recorded since the satellite record was started in December 1978 (35 March observations). The warmest March to date over this period was in 2010, with an anomaly of +0.57 degrees Celsius.

The El Nino Southern Oscillation (ENSO) cycle is the main determinant of when global mean temperature hits a new record over the medium term (up to 30 years). In this connection, the U.S. government’s Climate Prediction Center is now giving a 50% chance of an El Nino developing this summer or fall (here). Should this happen, I would expect the UAH anomalies to head back up into the 0.5s, 0.6s or higher. The next update is on the 10th of April.

The most high profile satellite-based series is put together by UAH and covers the period from December 1978 to the present. Like all these time series, the data is presented as an anomaly (difference) from the average, with the average in this case being the 30-year period from 1981 to 2010. UAH data is the earliest to be released each month.

Spencer, and his colleague John Christy at UAH, are noted climate skeptics. They are also highly qualified climate scientists, who believe that natural climate variability accounts for most of recent warming. If they are correct, then we should see some flattening or even reversal of the upward trend within the UAH temperature time series over a long time period. To date, we haven’t (click for larger image). 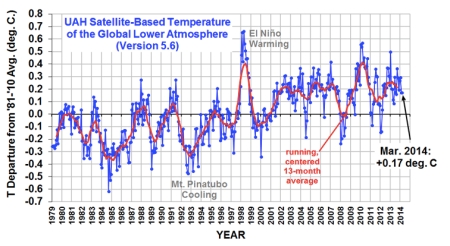 That said, we also haven’t seen an exponential increase in temperature either, which would be required for us to reach the more pessimistic temperature projections for end of century. However, the data series is currently too short to rule out such rises in the future. Surprisingly, The Economist magazine has just published a very succinct summary of the main factors likely accounting for the recent hiatus in temperature rise (here).