As can be seen from the chart below (click for larger image, link to original data here), the fracking of tight oil formations in the U.S. has made a major impact on U.S. crude production over the last few years.

Given crude oil is a globally traded commodity, U.S. production numbers need to be placed in the context of world supply and demand. The International Energy Agency (IEA), in its latest Oil Market Report (OMR) dated 11 April 2014, recorded global ‘all liquids’ (oil and condensate) production of 91.8 million bpd for March 2014. Year-on-year supply growth is averaging around 1 million bpd, or a little over 1%. 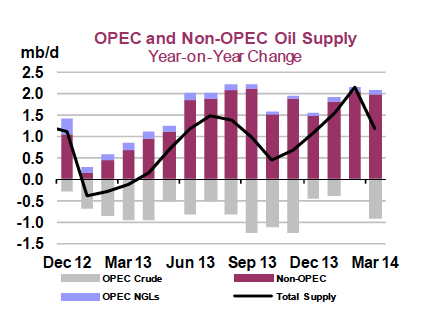 Mirroring supply, benchmark crude prices continue to bump along a plateau. Increased U.S. production is being offset by a reduction in OPEC output, particularly with respect to Libya and Iraq. As a result, both WTI and Brent have remained above $100 per barrel. 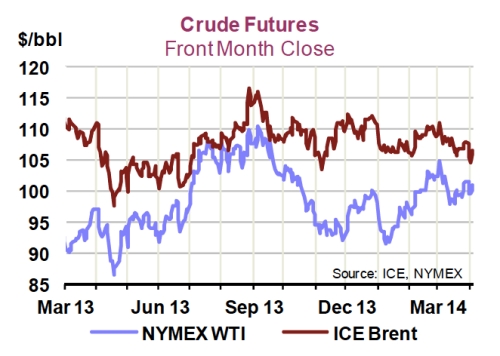 Full quarterly IEA world supply-and-demand figures, including 2013 provisional supply and demand numbers, together with 2014 forecasts, can be found here. Interestingly, 2013 supply is now given as averaging 91.6 million bpd, up only 0.6 million bpd from 2012. Successive articles in the media have pronounced peak oil dead due to the fracking of shale. This story is everywhere—except in the actual numbers, where almost no increase in supply can be seen.