The US government agency the Energy Information Administration (EIA) issues data on U.S. natural gas production, including shale gas, on a monthly basis with a lag of roughly two months. The latest data release was made on April 30th, and covers the period up until end-February 2014. Data is reported in billion cubic feet (bcf) and can be found here. Key points: 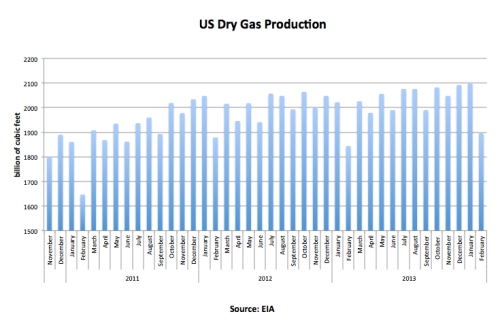 There was significant natural gas price volatility over the winter period due to unusually high gas demand prompted by periods of extreme cold. Critically, however, natural gas prices have remained elevated into spring at around $5 per million British thermal unit (Btu). 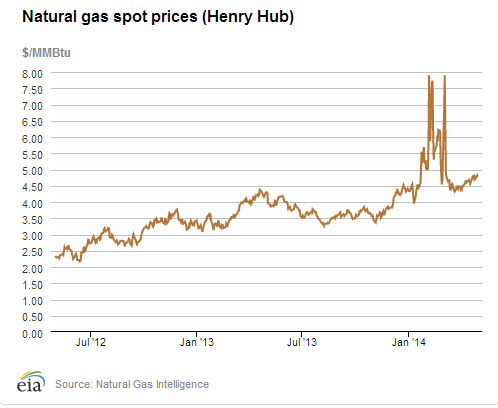 To put the current price of $5 in perspective, a long-term chart of natural gas prices is given below (click for larger image). Note that 1 million Btu is roughly equivalent to 1,000 cubic feet; the unit price is, therefore, comparable even though one chart refers to Btu and the other cubic feet.

As can be seen in the chart, two natural gas spikes took place in the 2000s, with the price temporarily moving above $10. However, the average price for the period was between $5 and $7. The current well head price has now moved into that zone. Adjusting for inflation, the current price is still cheaper than the price in the late 2000s—but not that much cheaper.

Much commentary on natural gas compares the 2012 price lows of around $2-$3 dollars with the $10 highs of the 2000s. This is very misleading and obscures the fact that shale gas is expensive to produce. My definition of a product revolution would be one with lower price and higher volume—integrated circuits being the classic case. Shale gas does not fulfil this definition. When price falls, production growth struggles; only with high price do you get production uplifts.

Nonetheless, despite U.S. gas prices trending above $5, the U.S. spot price remains significantly below the price in other markets as the chart below shows (taken from BG Group presentation here, click for larger image). Note that NBP refers to the ‘national balancing point’, the benchmark wholesale spot price of natural gas in the UK.

Until liquid natural gas (LNG) production and export facilities come on stream in the U.S., traders cannot arbitrage between domestic and international markets, so the divergence in prices will remain. When such facilities are available, the critical question is whether U.S. production can be ramped up to allow exports, and whether the volumes will be significant enough to impact on global market prices.