Since the 2008 financial crisis, we have seen a flurry of interest over the issue of inequality. Most recently, Thomas Piketty’s book “Capital in the Twenty-First Century” has drawn  a lot of attention. Yet there are a number of other academics who have been writing on this topic for some time, not least Danny Dorling, a social geographer now at Oxford University.

Dorling’s output is prodigious, and encompasses not just academic articles but also books aimed at the general public. You can get an idea of the breadth of his work by looking at his personal web site here. Last week, my daughter and I had the good fortune to see Dorling introduce his latest book, “Inequality and the One Percent“, to a packed house at the London School of Economics (LSE).

The LSE has done an invaluable service to the intellectual life of London and beyond by hosting free and open public lectures by just about everyone who is anyone in the field of economics or politics today. Furthermore, you can access podcasts, videos and slides of the events if you are not able to attend in person. The one for Danny Dorling’s lecture is here.

Apart from being a gifted speaker, Dorling is noted for using innovative data visualisation techniques to communicate his arguments, so we can get a sense of London’s monopolisation of UK wealth through looking at a slides such as this one (click for a larger image):

A key driver of this wealth disparity is the value of property in London:

Actually, there are two categories of “one percenters”: income and wealth. To qualify as a one percenter by income, you need to be earning £160,000 a year. To get into the top one percent by wealth, you need £2.8 million. This is a chart taken from the work of the LSE academic John Hills (see here): 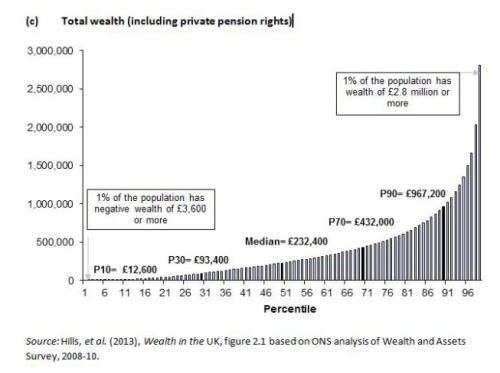 And from such data, Dorling produces infographics for both the UK and US:

Dorling is a proud left-winger: as such, a polemic against the super rich is to be expected. Nonetheless, I am surprised by how Dorling’s arguments are resonating across the political spectrum. In particular, he argues that the one percent has, in effect, detached itself from its natural allies the top 10% and the top 50%. Even the upper middle class is feeling the squeeze, with much of it going backwards in terms of financial security. In short, what economic growth there is is being monopolised by the super-rich.

The arch Tory Charles Moore, no friend of any socialist, has an article in The Daily Telegraph with this headline echoing Dorlng’s analysis:

Followed by this subhead:

Capitalism’s benefits are not felt by all, and the main parties are not talking about it

Moore goes on to argue that fewer and fewer are benefitting from the current political game:

Socialists love saying that the Tories are the party for the rich. If that were the case, they would never have won an election in the era of the universal franchise, since the rich are, by definition, a small minority. Labour’s underestimation of Margaret Thatcher in the Eighties arose from this error: it could not understand why she also appealed to many who were poor and to even more who were middling. So it lost. But now that the Conservatives have, as I say, not hit 40 per cent of the vote for 22 years, perhaps the criticism has greater validity. Perhaps they have got themselves on the wrong side of the divide between those who are comfortable and those who are struggling. And perhaps – stranger thought – the same problem applies even to the party which takes its name from the workers. For 13 years, Labour too has not hit 40 per cent. Those years have encompassed the crisis of capitalism, out of which it should have done well.

Moore finishes with an extraordinary paragraph that could have been written by Danny Dorling himself.

For six or seven years now, voters in the West have realised that capitalism was disastrously captured by those who operated it, so that it stopped benefiting the rest of us. No leader, of Left or Right, has yet worked out what to do about this. In Britain, both main parties have tacitly agreed not to discuss it at the next election.