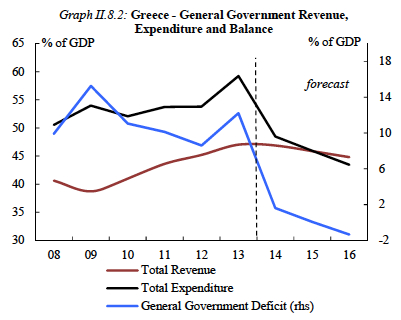 Already, the Greek budget is showing a positive primary balance; that is, expenditures before interest payments are less than revenue. So if the government didn’t pay interest to its debtors, it could spend more on welfare. But we are not talking about a lot of money here: a few billion euro at most. Alexis Tsipras, Syriza’s leader, likes to point out that Greece still has an awful lot of debt even after the restructuring by the Troika (the European Commission, European Central Bank and IMF), but the debt that it has is very, very cheap.

Nonetheless, according to the EU forecast, Greece is poised to show an overall budget surplus even after interest payments in 2015. The purpose of this surplus is supposed to be to pay down the debt mountain. But if the Greek government won’t do that, then they would have even more to spend. So far so good. But actually what we obtain from these measures alone is still a government running along very Germanic lines; in short, only spending what it earns. Hardly a revolution.

Let’s look at a breakdown of general government operations in more detail (from the IMF’s Fifth Review of its funding facility; click for larger image) 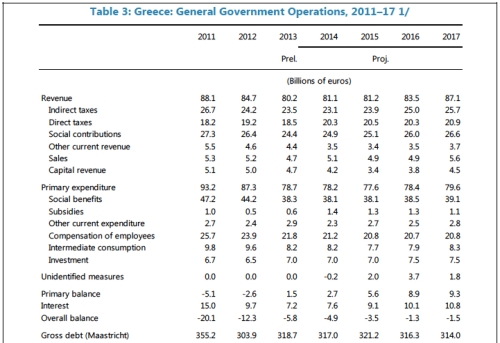 The pictures of poverty on Greek streets comes about through a combination of 25% unemployment and a safety net shrunken by the fall in social benefits from €47.2 billion in 2011 to ¢38.1 billion in 2014. If you ran the primary balance at zero in 2015 and growth stayed on the same course as the IMF projection, then Syriza may be able to restore a little over half of the social benefit cuts. Then each year after that (still assuming GDP growth holds up) you could claw back some more.

This, however, would do little to jump start the economy. To do that in a Franklin D. Roosevelt New Deal kind of way you would need to see a massive jump in public works spending (the lines in the chart above showing investment and compensation of employees ). But on the assumption that Syriza has defaulted on its debts, it will, at least for a time, be shut out of the capital markets, so it will be in no position to borrow to spend.

A good Keynesian like Paul Krugman would argue that 25% unemployment is incontrovertible proof of a massive gap between potential and actual economic output. In such a situation, the government should let the central bank buy its debt (through printing money), so allowing public spending to let rip. The risk that this raises inflation when you have massive underutilized resources is close to zero. But Syriza can’t do that since it doesn’t have a central bank to call its own; Syriza’s central bank, the European Central Bank, resides in Frankfurt, not in Athens. In short, it can’t print and spend.

How about redistribution? Are the Greek oligarchs quaking in their boots? Again the euro  restricts the government’s options. With no exchange controls and a common currency, the rich have maximum flexibility to flee as and when they wish.

Perhaps, this is why financial markets have reacted to the Syriza victory with such equanimity. For them, Tsipras may possibly be the Red Emperor with no clothes. Unless, of course, he drops the big one: a euro exit. Now that is what I would call a revolution.