Chart of the Day, 2 Feb 2015: Still Talking about a Shale Gas Revolution?

The US government’s Energy Information Administration (EIA) has just come out with US natural gas production figures for November. But before we look at them, let’s glance at the long-term chart first (Source EIA here): 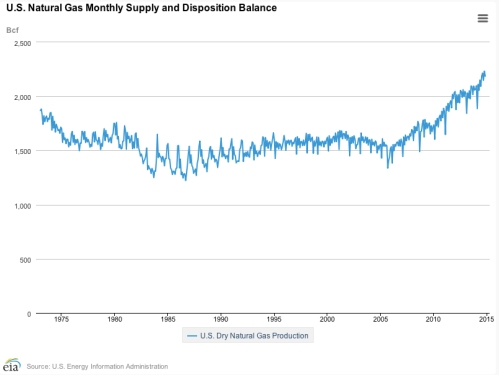 Looks good if you are a fracking enthusiast, although the chart makes the shale gas surge seem like one continuous, seamless event. Scale up to the monthly chart and the situation looks a bit more nuanced: 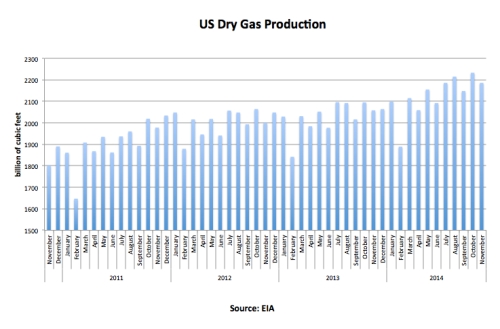 For two years, 2012 and 2013, production almost flatlined, before jumping up again at the beginning of 2014. The latest numbers show dry gas production for November up 6.2% year on year, and the twelve month average rose 4.6%. What explains the two-year hiatus in the shale gas revolution? That’s easy: price (Source: Nasdaq). 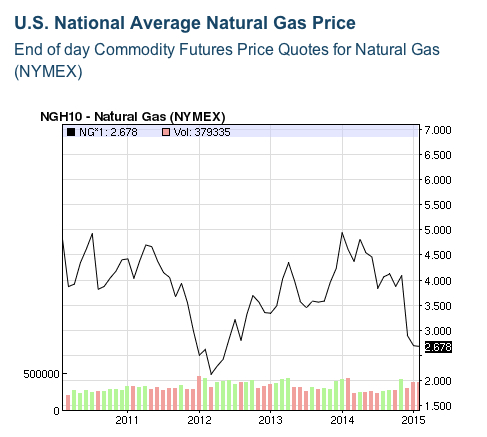 Meanwhile, the EIA’s latest Short-Term Energy Outlook (STEO) , released on 13th January, contains new forecasts that extend out through 2016 . The outlook is for a short plateau, then a renewed upward move: 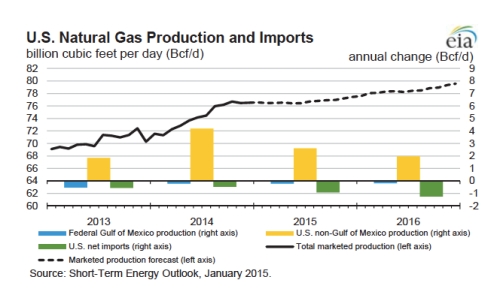 To be honest, foresting oil and gas markets is a nightmare, the reason being that you are actually having to forecast two interlocking variables: price and production. Keeping that caveat in mind, here is the EIA’s price forecast: 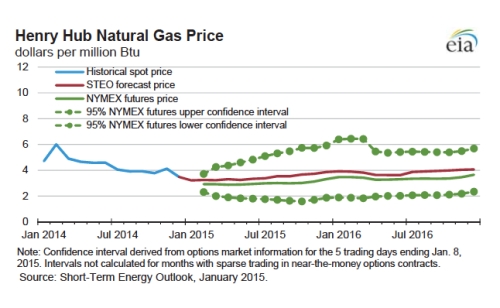 Putting price and production together paints a pretty optimistic picture from the EIA. Previously, the slump in prices in 2011 led to a plateauing of production in 2012. Further, a jump in prices in 2013 resulted in reinvigorated production growth in 2014. Of course, technology is changing, and this relationship may not hold. Indeed, that is what the EIA argues (from the 13th January STEO, click for larger image):

There are a lot of moving parts to the story. I haven’t touched upon the implications for associated natural gas (gas produced as a byproduct of drilling for tight oil) stemming from the oil price slump. Nor have I dealt with the big spat between the journal Nature and the EIA over shale gas reserve calculations. More to come on both of these topics in future posts.

Overall, though, remember the “peak oil” theory is really one of peak cheap oil (see my posts here and here). and you can extend the same logic to gas. Consequently, the cornucopians have a golden opportunity to nail the peakists if they can show one thing: that the world can produce more oil and gas at the current low oil and gas prices. We have a testable hypothesis–let’s see what happens.

2 responses to “Chart of the Day, 2 Feb 2015: Still Talking about a Shale Gas Revolution?”