The potential for secular stagnation has been a consistent theme of this blog; in other words, we should entertain the idea of slow (or even zero growth) as a possible norm–and plan our lives so that we fully recognise this risk. Meanwhile, the discussion of permanently slower growth has migrated from ‘crankdom’ to mainstream in five short years, and now even the IMF is humming the same tune.

This week, the IMF pre-released a chapter from its flagship World Economic Outlook publication. The chapter is titled “Where Are We Headed? Perspectives on Potential Output“. It starts off by pointing out that in advanced economies growth was coming off even before the Great Recession hit in 2008 (on all charts, click for larger image): 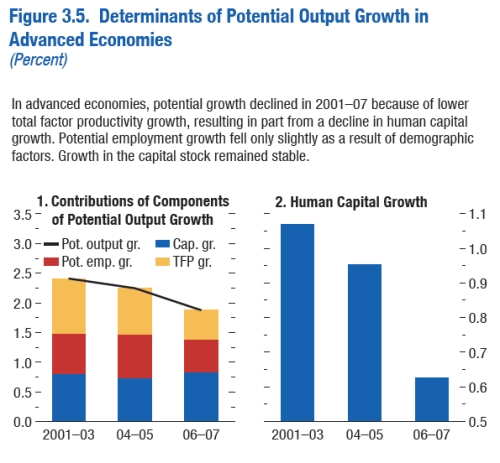 As the above chart shows, potential output growth can be divided into three components: 1) employment growth (more people or longer hours), 2) capital growth (more machines and computers) or 3) total factor productivity (better educated people plus innovation). The big decline was in the last category, which flies in the face of all the breathless cornucopian stories we here: tales of technology abolishing every human ill or want.

Furthermore, the IMF now increasingly recognises two stark realities. First, ageing societies will act as an increasing drag on growth in not only advanced but also emerging market economies and, second, total factor productivity gains are slowing in emerging economies as these countries get closer and closer to the innovation frontier of the advanced economies (moving from catch-up to caught-up).

As a result, the IMF has been paring down its medium-term growth forecast with every year that passes:

Of the three components of growth–labour force, capital and technology (broadly defined)–we have the highest visibility with the workforce. Basically, the advanced world is turning Japanese: the old will soon outnumber the young. What is less well known is that demographics in China are turning the emerging markets Japanese as well. 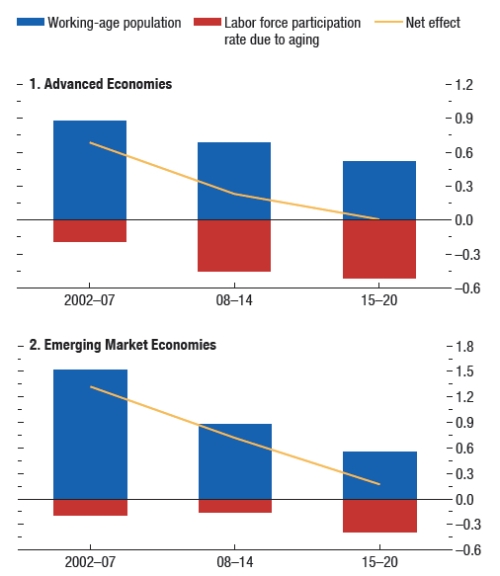 Nonetheless, while the IMF does see a new normal of slower growth it is still not a world of outright stagnation.

As commentary on the chart above, I would say that the ‘orange’ segment is by far the most difficult to forecast. What is more, technology is becoming a real wild card on both the demand side as well as the supply side. As technology upends the very nature of work, the impact on growth becomes increasingly unpredictable.

So given this blog’s focus on well-being, you may ask whether I am happy about potentially lower growth. In reply, I would point out that the IMF doesn’t once mention well-being in its report. Nonetheless, the two concepts of growth and well-being are connected but by no means the same. I could envisage high, low or zero growth scenarios that could be positive or negative for well-being. We have a matrix of possible outcomes here.

For example, in a low growth scenario, governments may respond by trashing natural assets (building on green belts, fracking in national parks) or slashing social benefits to push more people into the workplace at subsistence wages. This may restore a modicum of growth but at the expense of well-being.

Likewise, at a zero growth rate we could see a mushrooming of volunteering, self-help and community group formation that helps boost well-being. But I could also envisage a green growth scenario based on renewable energy and a burgeoning digital service economy under which well-being flourishes as well.

I could go on, painting scenarios from the utopian to the dystopian (with climate change the ever present spectre at the feast). At best, I could append some tentative probabilities, which would be permanently in flux. My only advice would be to plan for potentially bad outcomes as well as good.

In sum,  it’s complicated–and certainly more complicated than the IMF’s fixation on a growth number that gets ever more difficult to predict.