What Does ‘a Good Life’ Mean?

The main British political parties are in the midst of publishing their policy manifestos ahead of the May 7 general election: The Labour, Green and Conservative party manifestos are already out, the Liberal Democrats and UKIP ones are yet to come.

I will focus on the Conservative Party manifesto in this blog post since it could quite easily form the policy platform of the next government. Moreover, in rolling out the manifesto, Prime Minister David Cameron chose to frame the policy prescription in terms of helping people to achieve “a good life”.

As a politics, philosophy and economics (PPE) graduate from Oxford, I am sure the PM is well aware that the term ‘the good life’ carries with it considerable philosophical baggage. Does he give a nod to Aristotle’s definition of “the good life” or has he reduced the concept to mere materialism? Let’s take a look by first pulling out each reference to “a good life”in the speech Cameron gave introducing the new manifesto:

The next five years are about turning the good news in our economy into a good life for you and your family.

Realising the potential of Britain…

…not as a debt-addicted, welfare-burdened, steadily-declining, once-great nation – which is what we found…

…but that offers a good life to those who work hard and do the right thing.

That’s what I mean by a good life – families secure, the peace of mind that comes with a proper job and a career, the security of knowing your children are getting a great education.

…to make this a country where those who work hard and do the right thing can enjoy a good life.

Part of having a good life is having a home of your own.

It’s hard having a good life without a good job.

With five more years we can turn the good news in our economy into a good life for you and your family.

We offer a good life for those willing to try – because we are the party of working people.

So the good life includes 1) employment, 2) home ownership and 3) a great education for your children. It’s pretty pedestrian stuff and certainly a world away from Aristotle’s idea of the good life.

In particular, for Aristotle the good life encompasses good choices, good actions, good habits and good character. The highest objective that we can obtain is happiness, and happiness is a legitimate aim of human life. Nonetheless, his idea of happiness goes beyond simple pleasure to include the idea of a life well-lived; that is, a meaningful life that transcends one’s own individual existence. Further, man being a social animal, such a state of happiness can only be achieved within a communal setting.

In the modern happiness literature, Aristotle’s happiness, or a life well-lived, is often referred to as eudaimonia or flourishing. It complements the two other main categories of happiness: life satisfaction and affect (positive and negative feelings). To the coalition government’s great credit, such happiness concepts are now being tracked by the Office of National Statistics in its Personal Well-Being in the UK  survey. Nonetheless, it is a shame that none of this is anywhere to be seen in the manifesto.

For example, a major plank within the 2010 manifesto was the idea of creating a Big Society.

Moreover, how this would be achieved would have resonated with Aristotle. 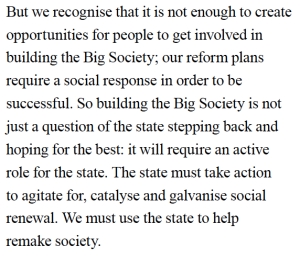 The recognition is that individuals will not necessarily engage in higher social relationships if left to their own devices: the state must ‘agitate’, ‘catalyse’ and ‘galvanise”. Aristotle put this more bluntly: individuals need to be taught how to lead a good life, and by such teaching they could then go beyond pursuing base material needs alone.

In the new Conservative Party manifesto, the concept of the Big Society still remains, but is pared back considerably. In particular, the state’s explicit role in catalysing social renewal is gone. Indeed, intellectually, the new 2015 manifesto is far inferior to the 2010 one. Politics is reduced to a shopping list rather than a philosophical endeavour.

At this point, those of you of a libertarian disposition may applaud the Conservative Party’s decision to trash the idea that the state should influence how people live their lives. To such an argument, I would answer that global capitalism is just one vast machine trying to persuade people to do just that: live their lives in a particular way. Each day, we are agitated, catalysed, galvanised, exhorted and emotionally blackmailed to seek happiness through the purchase of goods and services. The not so subtle message is that if we don’t buy this or that then we are bad spouses, parents or lovers.

In my humble opinion, a little balance would be a source of freedom rather than tyranny.

One response to “What Does ‘a Good Life’ Mean?”