You should have an opinion on Tony Seba,  He is someone not to be ignored because the upcoming technological change he predicts is so important. Indeed, if he is right, everything is about to change. So if you aren’t aware of his take on where the world is going, I highly recommend you watch one of his videos (for example here).

Tony’s PowerPoint presentation and pitch hasn’t actually changed much over the last four years. Indeed, if you click through his YouTube presentations from a variety of events, you get a distinct feeling of deja vu. But perhaps, like a modern-day Messiah, Tony feels the need to deliver just one central message:

“Get ready for a technological disruption that will dwarf all those that have gone before.”

His first book “Winner Takes all” is a typical airport self-improvement shopping list for the wannabe tech CEO, but then came “Clean Disruption” in 2014.  In this, Tony broadened his range to encompass, well, everything. The tag line on the front cover says it all:

While this industrial disruption is epic, the follow-on implications for urbanisation, climate change, geopolitics, development, growth, wealth and inequality are just as mind-blowing. Thankfully, Tony didn’t run with those themes too, but it doesn’t take much of an imagination to extrapolate out from his conclusions into a broad variety of social and political domains.

Wow! Moreover, this book was written in 2014, and given it’s now 2018, that means we only have 12 more years to go! That sounds ridiculously ambitious, if not ludicrous. Nonetheless, Tony always includes a pair of photos to tackle such doubts. Here is a picture of New York in 1900: 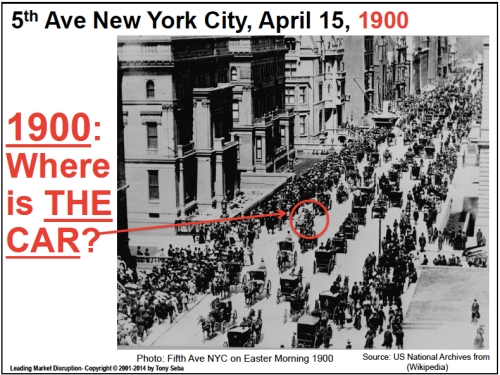 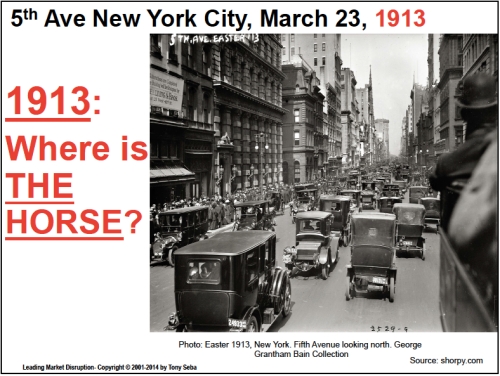 If such strategists were “doing a Tony”, they would have said everything will change in 2030, but not specify how much it will change; or, things will change by X amount, but not when such change would take place. By so doing, an erroneous forecast could always be dumped without too much reputational risk.

No such intellectual cowardice for Tony. Here is just one example of his forthright approach to forecasting, from page 127:

“There may still be millions of older gasoline cars and trucks on the road. Ten- to twenty-year-old cars are still on the road today. We may even see niche markets like Cuba where 50-year old cars are the norm. But essentially no internal combustion engines will be produced after 2030. Oil will also be obsolete by then.”

To make things manageable, I am going to pick off his forecasts in bite-sized chunks and see how they are doing from when they were first floated back in 2014. To put that in perspective, we are already 25% through Tony’s original forecast horizon.

Let’s  start with the above quote surrounding electric vehicles, not least because Tony set out a variety of milestones back in 2014 that should show us whether we are on our way to his EV nirvana. The first of these relates to S curves, which will be the topic of my next post.

Like Loading...
This entry was posted in Technology and tagged Clean Disruption, disruption, EVs, Tony Seba. Bookmark the permalink.