Not bad! I’ve reached number nine in my series of posts on Electric Vehicles (EVs) and haven’t done a post yet concentrating on Tesla. There are two main reasons for this. First, so much has been written about Tesla, and so many opinions are publicly available on the web about Tesla, that I am not sure I can add much.

Second, this is a series of blog posts looking at the question of whether EV penetration can realistically get to 95% in 2030, which roughly equates to around 130 million vehicles. Even if Tesla becomes the most successful auto company ever–or even if it becomes the most successful auto company ever multiplied by a factor of two–it alone cannot get even close to that target of 130 million EV sales. Let us say that in 2030 Tesla has the combined market share that Volkswagen and Toyota have today (the top two in terms of global autos sales market share). That combined VW-Toyota percentage share of the market now would equate to Tesla selling about 30 million cars in 2030. Pretty bloody good (if it ever happens), but it will not get us even close to 130 million EVs. For that to happen we need the collective heft of the rest of the global auto players.

Nonetheless, in our S-curve analysis we started by looking out 5 years, since battery plant and auto lines need to be financed and designed now in order for cars to roll off out in sufficient quantity in 2023. So let’s recycle this chart again: 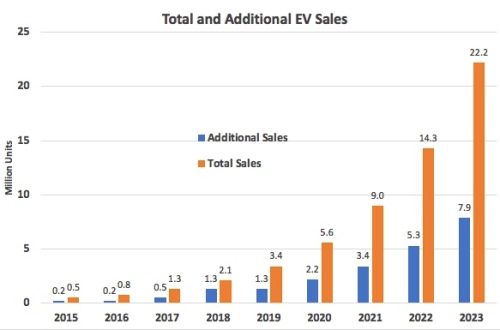 In my post on China’s New Energy Vehicle (NEV) strategy, I surmised that it would be relatively easy for China to hit its target of having 5 million NEVs (made up almost entirely of EVs rather than fuel-cell vehicles) on the road by 2020. That would see Chinese consumers buying around two million EV vehicles that year. My next question is whether Tesla, as the current world’s largest seller of EVs, could supply a large chunk of the other 3.6 million EVs needed in 2020 to stay on Tony Seba’s S curve. My answer to that is “possibly”. Here’s how.

First, Tesla will have enough batteries. From the press release accompanying their January 2017 investor event relating to their factory in Nevada:

The factory will produce cells, battery packs, energy storage products and vehicle components. Phase 2 construction, currently underway, will support annualized cell production capacity of 35 GWh and battery pack production of 50 GWh. The cell capacity represents more than the 2013 total global production of lithium-ion battery cells of all other manufacturers combined and supports the production of about 500,000 cars.”

So far, this entire series of blog posts have been dedicated to the supply side; in short, the question of whether the auto manufacturers have put, or will put, enough plant in place to physically build the necessary number of EVs for us to move up Tony Seba’s S curve of EV market penetration versus internal combustion engine (ICE) vehicles. I have said nothing about whether consumers will want to buy a ton of EV cars. In Tesla’s case, however, the demand side is already in the bag for a couple of years since the company has 450,000 reservation deposits for the Model 3 as reported in Tesla’s Q1 2018 results update letter released on 2 May 2018. This really is a case of “build it and they will come”. Moreover, for those who don’t believe that EVs can go mass market look at this chart contained in the same release by Tesla: 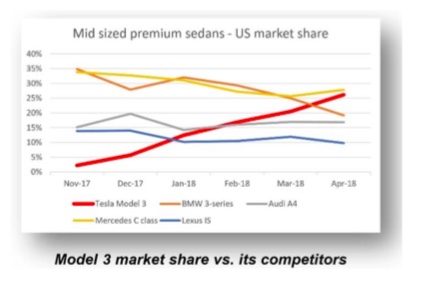 Given Tesla will be on an annualised run rate of 350,000 cars by end of June, it looks entirely feasible that this figure will improve to 500,000 by year-end. Then, with the gigafactory in Nevada being scaled up again and more new models to be released over the next two years, it looks likely that Tesla alone could do a third of the 3.6 million vehicle sales needed outside of China to stay on Tony Seba’s S curve through to 2020.

The situation beyond 2020 will be the subject of a separate post, but I want to finish this post by introducing a video by Jack Rickard, an electric car expert, explaining why he thinks Tesla will continue to go from strength to strength. Rickard looks like a Hollywood caricature of an elderly battery nerd, and I will come back to one of his videos where he deconstructs a Tesla battery in a future post.

What I like about Rickard, however, is that he obviously never picked up the book “How to Give a Ted Talk” or, for that matter, any self-help book on presentation style or image branding at an airport book stand. From looking at some of his videos, I have drawn up a Jack Rickard guide to giving a presentation:

So here is Jack Rickard spending one hour 50 minutes explaining why Tesla is revolutionising the auto industry, why its competitors are unable to respond and why Tesla’s stock is a screaming “buy”. Enjoy: