Chart of the Day, 1 Feb 2015: More Thoughts on Happiness, Tsipras and the Greeks

Yesterday, I referenced the OECD’s publication “How Was Life? Global Well-Being since 1820“. While it is still early days, it is encouraging that the OECD has started to treat GDP and well-being separately as seen in the OECD chart below (click for larger image): 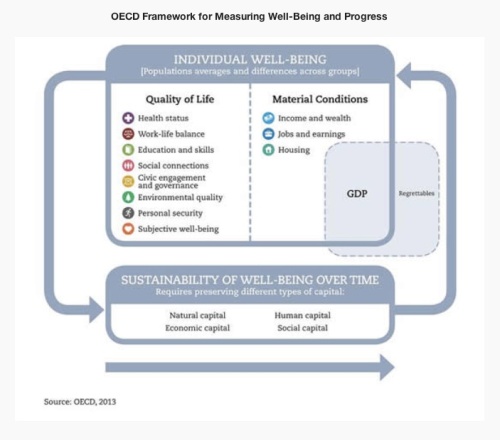 This is progress: for many year happiness studies and subjective well-being were viewed as being the domain of eccentrics and cranks, and certainly no subject for such a serious organisation as the OECD. One person who has done more than any other to help create the shift in perspective is Ruut Veenhoven of Erasmus University in Rotterdam.

Veenhoven is a vocal advocate of a rigorous evidence-based approach to happiness studies. Further, to encourage and help nurture the discipline, he founded the World Database of Happiness, which acts as a clearing house and repository for happiness data and its associated literature. For example, type in “Happiness in Greece” and you can find a time series like this (click for larger image):

Veenhoven is the first to admit that his discipline is still young, and there are numerous blanks to be filled. Yet he feels that politicians can already find tentative answers as to what would make their electorates more happy–if they could be bothered to ask the right questions.

With this in mind, the rise of new non-mainstream parties across Europe can be seen as a reaction to the falling levels of happiness experienced by large sections of the population. And this, in turn, is not just a reflection of economic hardship. Rather, it also mirrors the loss of agency, or the ability to shape one’s life, felt by an increasing share of both the working and middle classes.

Alexis Tsipras of Syriza in Greece and Pablo Iglesias of Podemos in Spain have been tapping into this angst. My hope is that they then forge policies that underpin happiness. For example, insecurity is a happiness killer. The burgeoning precariat, created by 21st century technology coupled with 21st century capitalism, should have some predictability given back to their lives. Nonetheless, Veenhoven points out that hard left ideas produced some of the worst regimes possible in the 20th century happiness-wise. High happiness requires personal choice and control, not things necessarily fostered by interventionist states.

I wish an ideology would emerge that harnesses technology and markets to promote genuine human flourishing. Such an ideology would take a very nuanced approach to economic growth, but would not necessarily be labelled ‘left’. I find it extraordinary that post the Great Recession, most western democracies are still run by centre or centre-right neoliberal elites. Secular stagnation and falling medium wages would suggest that the present socio-economic model isn’t working very well.

Given these facts, I would have hoped that a vibrant ideological alternative would have emerged (or at least old parties would have started wearing new clothes). In the UK, the early coalition government, with its green agenda and community-based concept of the Big Society, looked like it was evolving (at least partly) to reflect the new economic and social realities. Unfortunately, such fresh thinking has been progressively dropped, leaving a party closer to a Thatcher-style political ideal more than anything else.

Meanwhile, in southern Europe, my fear is that what Tsipras and Iglesias end up offering is recycled 20th century socialism. As I see it, that ideology is no longer fit for purpose in tackling our challenges either.

Going back to Veenhoven, if you want to hear a state of play on what determines life satisfaction, watch a lecture given by him here:

The Atlantic has just published a fabulous article entitled “The Danish Don’t Have the Secret to Happiness“.  It is a response to a myriad of charts that look like this (taken from a tongue in cheek article in the British Medical Journal that The Atlantic references):

Michael Booth, the author of the Atlantic article, is a Danish happiness cynic, questioning the happy state of Denmark on three fronts. He posits that

1. Danish happiness is a false construct arising from low expectations,

2. the boring nature of Danes allows them to remain happy, and

3. their smugness will ultimately lead to the nation’s final demise.

The low expectations argument is a restatement of what the happiness economist Caroline Graham calls the ‘happy peasants and miserable millionaires’ paradox (see, for example, here). According to her, our happiness set point can be a function of our surroundings.

While the research confirms the stable patterns in the determinants of happiness worldwide, it also shows that there is a remarkable human capacity to adapt to both prosperity and adversity. Thus, people in Afghanistan are as happy as Latin Americans – above the world average – and Kenyans are as satisfied with their healthcare as Americans. Crime makes people unhappy, but it matters less to happiness when there is more of it; the same goes for both corruption and obesity. Freedom and democracy make people happy, but they matter less when these goods are less common. The bottom line is that people can adapt to tremendous adversity and retain their natural cheerfulness, while they can also have virtually everything – including good health – and be miserable.

Indeed, an individual’s happiness set point can not only be a function of relative health, wealth, beauty and so on relative to one’s peers but also the same yardsticks measured against one’s past life. So how about the Greeks? Are they adapting to their new straightened circumstances? According to OECD data, the answer must be “no” or at least “not yet”. From the “How’s Life in Greece, May 2014” survey, life satisfaction comes in at around 4.7 out of 10, which puts Greece at the bottom of the OECD (here).

Further, while life satisfaction can be dubbed a function of the remembering self (when I sit down in a chair and think of my life, am I satisfied), people’s happiness as also related to their experiencing self (using the Nobel prize winner Daniel Kahneman’s terminology– see my post here). In short, am I cold, hungry, stressed, anxious , sad and/or in pain; or am I warm, replete, joyful, relaxed, rested and/or content? The OECD reports that only 52% of Greeks report having more positive than negative experiences in an average day (the lowest in the OECD) compared with an average of 76%.

For Greece to live with long-term austerity, Angela Merkel and the Troika must believe that Greek happiness indicators must, in the course of time, reset upwards. Unfortunately, they haven’t been reading the happiness literature in sufficient depth. While life satisfaction can adapt, adaption is generally a reaction to a set of circumstances that you have grown up with. Such forms of satisfaction lack what Graham calls “agency” or “the capacity to pursue a fulfilling and purposeful life”.  And once you have tasted “agency” you don’t want to lose it.

The appeal of Syriza, and its slogan of “hope”, is its potential to restore a degree of agency to the Greek people. Whether they can deliver this agency is a different question. In reality, income and wealth bestow a high degree of agency since they give us the financial wherewithal to make choices. However, agency can still arise from non-financial means, such as having the ability to adopt a non-conventional lifestyle, move from one area to another, change career, better one’s education and gain access to art and culture.  To stop disillusionment setting in, Syriza will have to put much effort into the fostering of such sources of low cost agency.

Happiness can be viewed from other vantage points too. Many scholars of happiness have identified eudaimonia as a source of happiness. This is sometimes described as human flourishing, but I prefer to view it as the sense of participating in and contributing to something greater than one’s own life. Past political movements have tapped into eudaimonia to give their followers a sense of shared propose and even destiny–sometimes, of course, to disastrous effect. However, at its best, it can be a fuel for transformational social movements that enthuse and enrich those advancing the cause as much as the final beneficiaries. Alexis Tsipras has certainly given Greeks a vision of change that could stimulate eudaimonia, but whether this can morph into a philosophy or ideal that has some staying power beyond the post-election honeymoon is a different question.

Meanwhile, for Danes seeking eudaimonia, a temporary move to Greece would not be a bad idea. But remember that the Danes always have the option of returning to Denmark and restocking on more mundane sources of happiness. The Greeks don’t.