Apologies for the late reporting of this number; my brain has been occupied with job-eating robots and computers for the last few weeks (and another post on this theme to come).

Apart from getting the latest monthly US natural gas number, I also want to do a quick catch up on The Energy Information Administration (EIA)’s “Annual Energy Outlook 2014″, which came out in mid-December and the “Short Term Energy Outlook” that came out on January 7th with new 2015 numbers.

But first the monthly number: the US government agency the EIA issues data on U.S. natural gas production, including shale gas, on a monthly basis with a lag of roughly two months. The latest data release was made on January 7th, and covers the period up until end-October 2013.

Since the end of 2011, production growth has stalled (click chart below for larger image), with the year-on-year 12-month average now flat-lining. 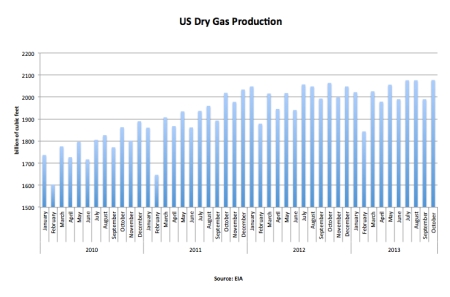 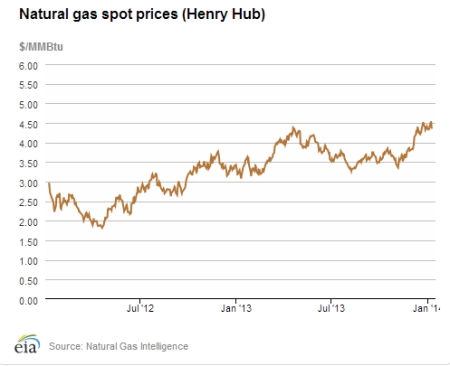 To put the current price of $4.5 per million Btu in perspective, a longer term monthly time series going up until end December 2012 is given below (click for larger image). END_OF_DOCUMENT_TOKEN_TO_BE_REPLACED