The Absurdity of ‘Abenomics’ and the PM’s ‘Three Bendy Arrows’ (Part 4: Bubble Economics)

As I write this post, the yen has broken below 100 to the U.S. dollar and the Nikkei has closed at a five-year high. So surely Abenomics is working, isn’t it? Well, it is certainly pushing up asset prices. Indeed, if I were still in my old job as a Japanese equity hedge fund manager I would have swung the bat as hard as I could after Bank of Japan Governor Kuroda’s original April 4 announcement. And I would plan to keep swinging the bat well into the future. Indeed, if my risk manager was not having a heart attack by now, I would feel I had not done my job properly.

Strange as it may seem, this is the logical path to follow given that Kuroda has based his analysis lock, stock and barrel on New Keynesian monetary theory. The two canonical papers that sit behind this are Paul Krugman’s “It’s Baaack! Japan’s Slump and the return of the Liquidity Trap” and Gauti Eggertsson and Michael Woodford’s “The Zero Bound on Interest Rates and Optimal Monetary Policy”. The Eggertsson and Woodford paper, which we can think of as Krugman 2.0, has become the intellectual bedrock for the Fed in fighting deflation and is much quoted by Fed Governor Ben Bernanke.

Both papers are difficult reads for the non-economist, but, as I mentioned in my previous post, the Richmond Fed has made available a “A Citizen’s Guide to Unconventional Monetary Policy” for non-specialists that contains the core policy prescription of the two academic papers referred to above.  From A Citizen’s Guide, the critical passage is this:

In the Eggertsson and Woodford model, the com- mitment to making monetary policy “too easy” would only stimulate economic activity if the commitment is viewed by the public as highly credible. That is, markets must believe that the central bank will, in fact, hold rates “too low” in the future simply because it promised to in the past, despite the fact that at that point, it would wish to raise rates to avoid inflation.

Krugman, ever the wordsmith, put this more succinctly:

The way to make monetary policy effective, then, is for the central bank to credibly promise to be irresponsible…

Now we now that asset price inflation operates on a different time scale to consumer price inflation: indeed, Japan’s stock price indices are already up 50% from their December lows, while consumer price inflation has barely budged. Nonetheless, to whatever level asset prices go, Kuroda has to keep his mouth firmly shut to have any chance of the changing public perceptions of future inflation. He is not allowed to make Greenspan-type gnomic references to “irrational exuberance”, let alone pull back from Japanese government bond buying. He must drive Japan’s monetary policy as if he was in one of those defective Toyota cars that was recalled due to a faulty accelerator pedal that got stuck to the floor.

This, of course, is a bubble meister’s charter, since for Kuroda to succeed in changing consumer expectations he must keep the accelerator pedal depressed for years. It is also worth keeping in mind that the Bank of Japan’s newly minted 2% inflation target is only an intermediate goal. As I explained in my last post, what monetary policy is really trying to achieve here is the closure of an output gap, i.e., the difference between where the economy is currently operating and where it could be operating if labour and capital were fully employed.

Moreover, the problem is perceived as one of lack of demand, not supply. The idea is that households won’t spend today because they think goods will get cheaper tomorrow. In effect, even if they hold cash at the bank earning zero, deflation means that they are getting a comfortable real return. The policy goal a la Krugman, Woodford and Eggertsson is to make that real return negative. And the only way to create a negative real return when interest rates are zero is to have inflation. If you can persuade the populace that inflation is barrelling toward them in the future, then they will cut savings and increase consumption now—or so the theory goes.

In addition, if the economy is idling below potential with unused capital and labour, any sudden jump in demand will result in high productivity and economic growth. Growth, in turn, will lead to higher wages and greater government tax receipts. Thus—and this is where the magic of macroeconomics comes in—the act of spending more now results in higher wages and living standards in the future.

Surely, a classic win-win: more consumption and more growth. What’s not to like? Nonetheless, there are a number of problems. First, how smoothly this all works depends to a large degree on the extent of the output gap. An article by Gavyn Davies in The Financial Times takes a look at the difference between output gaps if we just extrapolate past growth and those if we take into account supply side phenomenon (click for larger image) for a number of countries. 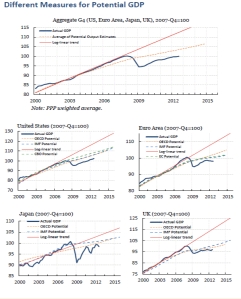 He explains the graphs in more detail: END_OF_DOCUMENT_TOKEN_TO_BE_REPLACED