With impeccable timing (for my current blogging theme), Nature Climate Change has just published a commentary by Bjorn Nkyvist and Mans Nilsson reviewing the falling cost of battery packs for electric vehicles (source: here, but apologies as the article is behind a paywall). Bottom line: costs have been falling faster than predicted a few years ago (click for larger image). 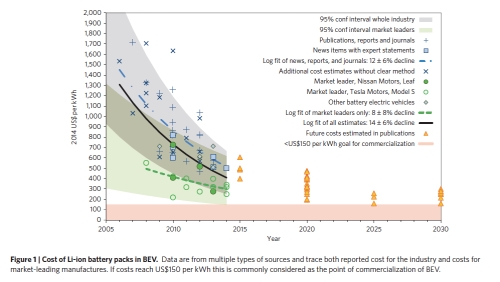 In line with Tony Seba’s estimates I blogged on two days ago (here), Nykvist and Nilsson saw total battery pack costs fall 14% per annum between 2007 and 2014 from $1,000 per kilowatt-hour (kWh) to $410. The market leaders in terms of auto battery technology, Tesla and Nissan, saw a slightly lower rate of decline of 6 to 9% since they have been at the cutting edge of improvements and have had less potential for catch-up than the industry as a whole. However, their costs per kWh are now seen at around $300 per kWh of battery capacity. Note that a BMW i3 has battery capacity of approximately 19 kWh, a Nissan Leaf 24 kWh and a top of the range Tesla 85 kWh. END_OF_DOCUMENT_TOKEN_TO_BE_REPLACED