Who would have thought that sea level would exhibit volatility? Latest data from the U.S. government agency the National Oceanic and Atmospheric Administration (NOAA) to mid-January shows sea level rise pushing to the top of its twenty-year trend line. But only a little more than a year ago sea level exhibited a significant drop of 5 mm (and the “climate skeptic” blogosphere was alight with the claim that sea level rise had stopped). The drop was related to a sudden transition from El Nino to La Nina conditions which dumped an unprecedented amount of water on land. An explanation by NASA of this phenomenon is here.

A good backgrounder on sea level rise can be found at Real Climate (here and here) by Stefan Rahmstorf, one of the world’s foremost experts on sea level.

The major sea level time series all show sea level rising at roughly 3 mm per annum linear rate over the past two decades. 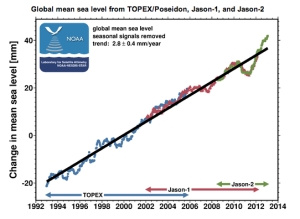 In order for us to experience the more pessimistic sea level rise outcomes of 1 to 2 metres by end of century (see for example here), the rate of rise will need to break out of its linear 3 mm per annum trend in the not too distant future. High rates of sea level rise have the potential to cause massive economic disruption, so a careful tracking of any change in trend is a critical component in gauging climate risk. END_OF_DOCUMENT_TOKEN_TO_BE_REPLACED