Of Straw Men and Peak Oil

Now here’s a task for you. Click on the link here to Economist’s View, probably the most widely visited economics blog and aggregator of all things economics-related on the web. Go to the Google Search function at the top and type in  ‘Peak Oil’ restricting the search to ‘This Site’. What do you get? The answer: very little (relatively speaking). Around 98o results, compared with a total of 9,500 for the word ‘Greece’.

Glance a couple of results down and you will see one headline titled “Peak Oil is Stupid”. If you follow the link, you will end up at a post by Tim Haab, blogger at Environmental Economics and an economics professor at Ohio State University. What does he have to say about Peak Oil:

Must be time to update my semi-regular ‘peak oil is stupid’ rant.  So here goes…

Well that has put the Peak Oilers in their place then! But just in case, let’s see what two of the most famous Peak Oil advocates, Colin Campbell and Jean H. Laherrere, had to say back in March 1998 when  they wrote a a high profile article (here) for Scientific American (when oil cost $12 a barrel):

The world is not running out of oil – at least not yet. What our society does face, and soon, is the end of the abundant and cheap oil on which all industrial nations depend.

From an economic perspective, when the world runs completely out of oil is thus not directly relevant: what matters is when production begins to taper off. Beyond that point, prices will rise unless demand declines commensurately.

Thus from a theoretical standpoint, there is in reality not much difference between Campbell and Laherrere, on the one hand, and Haab on the other.

And now a plea from me: could everyone please keep their straw men in the barn. If we only seek out the views  within the opposing camp of the extremists, or the outdated, it is relatively easy to knock down their arguments—but it doesn’t further the debate. Few Peak Oilers now say that one day there will be oil and the next it will be gone; most prescribe, like Campbell and Laherrere, to the idea of peak ‘cheap’ oil and the theory that an oil production growth constraint could increasingly impact on wider economic growth and human welfare.

The critical point here is that biophysical approaches to economics warn of the tyranny of the second law of thermodynamics: energy and matter will tend to entropy (disorder). From a neoclassical perspective, this, translates into increased scarcity and an upwardly sloping supply curve that moves continually to the left. This contrasts starkly with the neoclassical cornucopian paradigm that as technology advances the supply curve moves inexorably to the right. 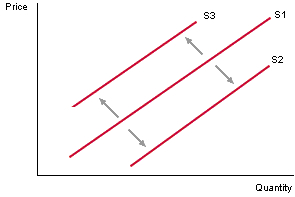 And so back to oil. A strong proponent of the magic of markets and technology over the years has been Daniel Yergin the cofounder of Cambridge Energy Research Associates and the author of a number of highly influential books on the oil industry, the most recent of which—”The Quest”—was a mainstay of my Christmas reading. If you don’t want to read the book, then I recommend an Op-Ed piece he wrote for the Wall Street Journal here.

The article, again, is built around a straw man, in this particular case the ideas of the earth scientist Marion King Hubbert, the father of Peak Oil:

Hubbert insisted that price didn’t matter. Economics—the forces of supply and demand—were, he maintained, irrelevant to the finite physical cache of oil in the earth. But why would price—with all the messages that it sends to people about allocating resources and developing new technologies—apply in so many other realms but not in oil and gas production? Activity goes up when prices go up; activity goes down when prices go down. Higher prices stimulate innovation and encourage people to figure out ingenious new ways to increase supply.

Hubbert is certainly a towering figure in the Peak Oil movement, and Campbell and Leherrere likely built on his intellectual foundations. But schools of thought (at least good ones) evolve, and it is no different with the advocates of peak oil. Thus, if one is to criticise Campbell, it cannot be because he ignores price (even though M. King Hubbert certainly held the market system in little esteem).

If one reads Daniel Yergin after reading the Campbell and Laherrere article, what jumps out at me is how little new is in “The Quest”, despite 12 years elapsing between the two publications. (Is that why Yergin had to reach back decades earlier for his straw man?) For example, Campbell and Laherrere recognised that technology is having an impact:

A second common rejoinder is that new technologies have steadily increased the fraction of oil that can be recovered from fields in a basin—the so-called recovery factor. In the 1960s oil companies assumed as a rule of thumb that only 30 percent of the oil in a field was typically recoverable; now they bank on an average of 40 or 50 percent. That progress will continue and will extend global reserves for many years to come, the argument runs.

They go on to argue, however, that such technological progress is already factored into oil company forecasts of reserves to a high degree. Moreover, their paper accepts the existence of large reserves of unconventional oil such as the Orinoco oil belt in Venezuela, and tar sands and shale in Canada. They also perceived the potential for natural gas liquids. They hardly come across as Luddite technophobes:
.

If advanced methods of producing liquid fuels from natural gas can be made profitable and scaled up quickly, gas could become the next source of transportation fuel.

At this point, let me have a little rant of my own echoing that of of Professor Haab who kicked off this post. Peak Oil thought does not automatically contradict the underlying philosophy of market economics. Most of it can be encompassed in the idea that the oil supply curve is inelastic over the short term and will tend to move to the left over the long term as resources run dry, thus leading to permanently high prices.
.
Put differently, the argument is not one of whether supply and demand curves exist, but rather what shape they are and how they move through time.
.
Critically, the massive global oil market, consisting of numerous buyers and sellers and highly visible price, proves a wonderful free market test. So let us see what the oil price has done since Campbell and Laherrere wrote their paper back in March 1998 (chart is Brent oil):
. 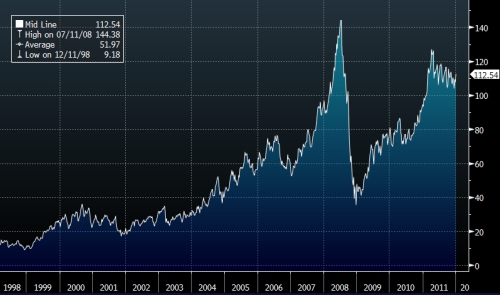 .
The market speaks—and it is stunning reaffirmation of Campbell and Laharrere. Yergin’s book “The Quest” is a paean to technology: data processing on an unheard of scale, horizontal drilling, CAD/CAM oil field design, deep water drilling, new technology to extract oil from tar sands and shale—the list goes on. In other words, the modern world oil industry is a tribute to science, as well as man’s endeavour unleashed by free markets. Yet over that period the oil price has risen tenfold in nominal terms and over fivefold in real, inflation-adjusted terms. And here is the supply response (taken from the BP Statistical Review). Lacklustre at best.

.
In short, when the market price of an item rises, it should cause people to substitute away from the good and cause more investment in the production of the good: this is Economics 101. Taken together, the market should produce countervailing forces that ameliorate the rise. Over the last decade, this has not been happening. Mr Market has spoken, and it has been on the side of Peak Oil. It would be nice, therefore, if Economist’s View could give the issue a little more respect—despite the undoubted importance of Greece.
.