A Host of Katrinas and the Damage Function

If you are interested in the interface between weather and climate, then I would highly recommend Dr. Jeff Master’s Wunderblog. Yesterday, Jeff highlighted a paper by Aslak Grinstead of the Danish Niels Bohr Institute looking at storm surge frequencies.

Grinstead has decided to take as his unit of measurement a Katrina-sized storm surge. While we all know that this is pretty big, the high water marks in the photos below from Master’s post (click for larger image) bring home just how amazing the storm surge was: 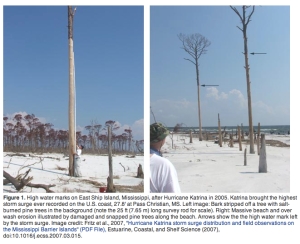 Turning to the institute’s press release, Katrina-scale storms surges are recorded as having taken place around once every 20 years since 1923. However, Grinstead’s main finding is that this frequency no longer holds:

We find that 0.4 degrees Celcius warming of the climate corresponds to a doubling of the frequency of extreme storm surges like the one following Hurricane Katrina. With the global warming we have had during the 20th century, we have already crossed the threshold where more than half of all ‘Katrinas’ are due to global warming.

And he goes on:

If the temperature rises an additional degree, the frequency will increase by 3-4 times and if the global climate becomes two degrees warmer, there will be about 10 times as many extreme storm surges. This means that there will be a ‘Katrina’ magnitude storm surge every other year.

You can see the relationship in the chart below (click for larger image). Note the log scale for Katrinas per decade on the left, which means such events do not rise linearly with temperature—rather they go through the roof.