The Absurdity of ‘Abenomics’ and the PM’s ‘Three Bendy Arrows’ (Part 3: Monetary Policy and a Fictitious Can)

In my two previous posts on Abenomics (here and here), I argued that Japan is a post-growth economy. As the OECD explains in its Compendium of Productivity Indicators 2012, growth can be achieved in only three ways:

Economic growth can be increased either by raising the labour and capital inputs used in production, or by improving the overall efficiency in how these inputs are used together, i.e. higher multifactor productivity (MFP). Growth accounting involves decomposing GDP growth into these three components, providing an essential tool for policy makers to identify the underlying drivers of growth.

Therefore, if I am to be proved wrong in my declaration that Japan is post-growth, Abenomics must be able to boost labour inputs, and/or increase capital inputs and/or improve multifactor productivity (innovation and efficiency). By definition, the Abe agenda must encompass one or more of the three—there are no other means of achieving growth.

Against this background, Prime Minister Abe has given top billing to monetary stimulus within his ‘three arrow’ policy agenda. He campaigned and won a general election on a pledge to force Japan’s central bank, the Bank of Japan, to adopt a binding 2% inflation target through unlimited monetary easing and thus slay deflation. Moreover, to execute such a strategy, he backed a new BOJ governor, Haruhiko Kuroda, who took office in March. Kuroda, in turn, has executed Abe’s monetary policy agenda with gusto. (For a fascinating article on how Kuroda deftly manoeuvred the BOJ board into unanimously support the policy shift, see this Reuters’ article here).

In contrast with the speeches of his predecessor, Masaaki Shirakawa, Kuroda’s early utterances have been accompanied by a very thin chart pack dominated by the now famous ‘all the twos’ slide (click for larger image): 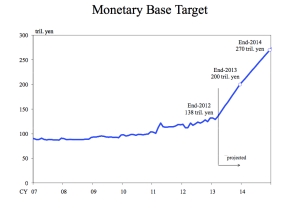 By contrast, the action by the Federal Reserve Board in the U.S. looks positively cautious (here), with the monetary base a modest 17% of GDP. END_OF_DOCUMENT_TOKEN_TO_BE_REPLACED