Battery Banter 4: Could the Grid Cope with a Next Generation EV?

In my last series of posts, I focussed on the war of attribution between electric vehicles (EVs) and traditional internal combustion engine vehicles (ICEs).  Due to the recent slump in oil prices, EVs are on the defensive. They need increased volume to get down their cost curves and punch out of their current redoubt of super cars (Tesla) and green credential statement cars (Nissan Leaf). Low gasoline prices has made such an offensive a lot more tricky to pull off.

But let us suppose that a commercial super battery were to emerge that had high energy density and was cheap. What would happen next? Let’s run this thought experiment in a UK context.

First, let’s look a the UK’s existing fleet. Great Britain has a population of 64 million people, who between them drive around 29 million registered cars (source: here, click for larger image). 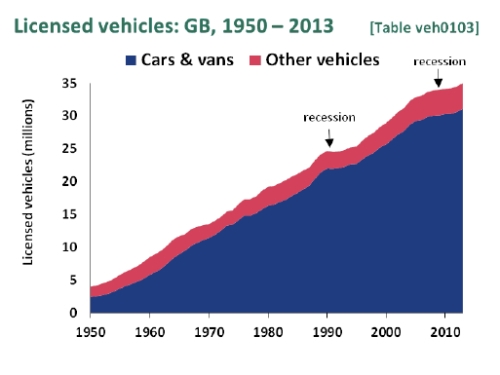 And annually each car is driven for an average of 8,000 miles, which translates into 22 miles per day (click for larger image; also remember we are smoothing out weekends and holidays). 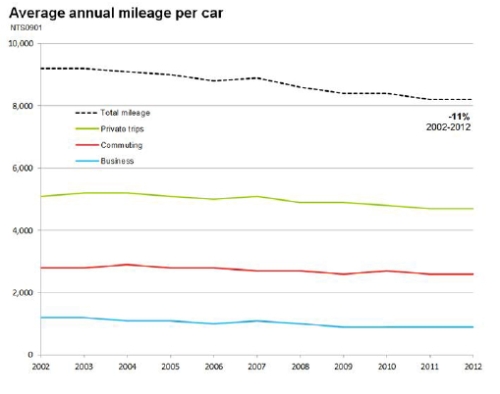 From a previous blog post, I republish the following chart, which shows the kind of mileage per kilowatt-hour (kWh) a battery achieves at present. END_OF_DOCUMENT_TOKEN_TO_BE_REPLACED

In my last post, I talked about the challenge that low oil prices pose for the electric vehicle industry. The following chart from a 2012 McKinsey battery study shows the key tipping points (click for larger image): 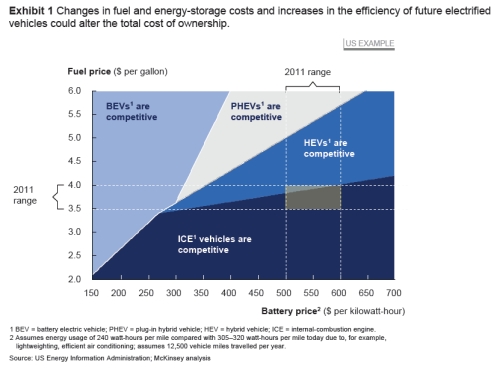 With US gasoline (petrol) prices currently running at $2.5 per gallon, we are falling into the bottom left corner of the chart. In short, the battery price for battery electric vehicles (BEVs in the chart) must plummet to keep EVs in the game. As stated yesterday, Nissan and Tesla are getting their battery costs down to around $300 per kilowatt-hour (kWh), but this is still far above the current sweet spot of $150-$200.

Previously, I also talked about the ‘learning rate’: the rate at which battery prices could fall due to learning from experience manufacturing cost savings for every doubling of battery volume. The industry is in the ‘Catch 22’ position of not being able to crank up volume sufficiently to get down its cost curve since EVs are just too far adrift from internal combustion engine vehicles price-wise to secure volume sales. So what is to be done? END_OF_DOCUMENT_TOKEN_TO_BE_REPLACED