The UK is in the midst of a productivity panic. The country has exhibited a solid economic recovery measured in terms of GDP, but not one in terms of being able to do more with less. In short, the country is pumping out a larger amount of stuff and services because a) more people are working and b) those who are working are putting in longer hours.

Likewise, the US faces a similar productivity conundrum (if not quite so pronounced). Take this chart from the Federal Reserve Bank of Atlanta (here, click for larger image): 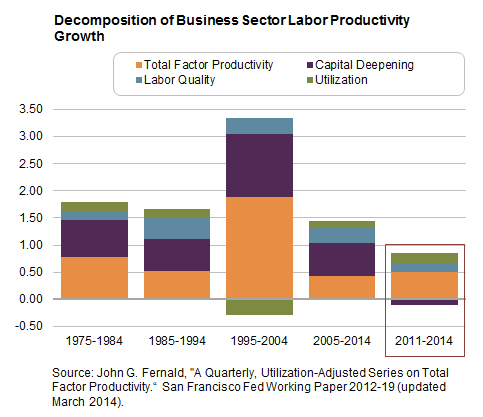 The US appears to be productivity-challenged as well. And productivity is the thing that is supposed to make us rich (sort of). What is going on? Well, we could surmise that we are suffering from the early symptoms of diminishing returns to technology, an idea advanced by the growth economist Robert Gordon (see here).

END_OF_DOCUMENT_TOKEN_TO_BE_REPLACED

Various individuals have been writing about ‘no growth’ or ‘negative growth’ economics in recent years: Richard Heinberg of the Post Carbon Institute springs to mind; or for those who like to ski off piste, James Kunstler at Clusterfuck Nation or Nicole Foss at Automatic Earth. But don’t expect to find any hypertext links to Heinberg et al’s writings at Economist’s View—the highest profile aggregator of economic commentary collated by economics professor Mark Thoma—since the CVs of all three can best be described as lacking gravitas in the area of formal economics.

Then something strange happened back in September 2012. Heinberg, Foss and Kunstler unknowingly recruited the most unlikely of allies.

The doyen of growth economists Robert Gordon wrote a short commentary for the Centre for Economic Policy Research suggesting that the glory days of economic growth in the U.S. were gone for good. Gordon’s “Is US Economic Growth Over? Faltering Innovation Confronts the Six Head Winds” is still an important read and can be found here. In the paper, Gordon  suggested that the last 250 years of high growth could be considered an exception rather than the rule:

Since Solow’s seminal work in the 1950s, economic growth has been regarded as a continuous process that will persist forever. But there was virtually no economic growth before 1750, suggesting that the rapid progress made over the past 250 years could well be a unique episode in human history rather than a guarantee of endless future advance at the same rate.

The unique nature of recent growth can be put in perspective by looking at the following chart from Gordon’s paper that splices together a times series from the U.S. and England (obviously data doesn’t go as far back as 1300 for the U.S.):

Gordon then went on to make what he calls a “fantasy forecast”, under which growth in GDP per head declines to the rate of 0.2% per annum by the end of the century.

By fantasy, he meant a hypothetical growth rate that would be consistent with the six headwinds to growth that he identified, albeit accepting a degree of uncertainty in the chosen variables. The six head winds are as follows:

Each headwind is given a rough value that subtracts from the 1.8% average GDP per head growth rate that was sustained for the two decades up until the credit crisis of 2007.

For some additional colour on his thinking, you can find a TED talk of Gordon’s here.

Eighteen months on and Gordon is back with a paper for the National Bureau of Economic Research (NBER) called “The Demise of U.S. Economic Growth: Restatement, Rebuttal, and Reflections”. It’s behind a paywall (here), although you can buy a copy for $5, but I will pluck out a few charts and the main points. First, this critical chart:

At first glance, it looks similar to Figure 6 from the original commentary that I reproduced above, but actually there are some substantive differences.

First, our starting point is the average GDP growth rate from 1891 until 2007, encompassing the entire Second Industrial Revolution (to use Gordon’s terminology) and its aftermath;  the growth figure (GDP per head) he gives for this period is 2.0% per annum. We then subtract bad demographics (-0.3%), the stagnation in education attainment (-0.2%), rising inequality for the bottom 99% of the income distribution (-0.5%) and debt transfers (-0.2%).

The last bar is critical since it captures faltering innovation (-0.6%), which Gordon sees as a central concern for all advanced economies. He contrasts the three general purpose technologies—electricity, the internal combustion engine and remote communications by telegraph and then telephone—developed during the Second Industrial Revolution with the lesser value information technologies of the so called Third Industrial Revolution currently taking place.

Gordon is lukewarm with respect to the degree to which the current information and communication technology revolution have contributed to human welfare. Here are the main fruits of the so called IR3 as he sees them (click for larger image):

Yet, despite these innovations, productivity has already slowed substantially:

Gordon is at pains to stress that he is not forecasting a new slowdown in productivity, just extrapolating one that has already taken place:

There is no need to predict any faltering or slowdown in the rate of innovation over the next 40 years. My baseline productivity growth forecast (for the total economy) of 1.30 percent per year starts from the realised growth rate over 1972-2012 of 1.59% and subtracts Jorgenson’s 0.27% precent for the likely effect of the slower advance of education attainment.

He is also highly skeptical of those techno-optimists like Brynjolfsson and McAfee who see a technical nirvana.

They remind us Moore’s Law that predicts endless exponential growth of the performance capability of computer chips, without recognising that the translation from Moore’s Law to the performance-price behaviour of ICT equipment peaked in 1998 and has declined ever since.

Moreover, all those new technologies beloved by newspaper columnists receive short shrift including small robots, AI, 3-D printing, gene-based medicine, Big Data and driverless cars. In Gordon’s view, most of these are merely refinements of existing technologies that date back decades. Further, although there was a short-lived jump in technology led productivity during the tech boom of 1996-2004, such gains have since slumped. So why should the future be any different?

Lastly, and critically, the new paper leaves out two head winds to growth from his older analysis: globalisation and energy/environment. If you add these into the new new forecast, then it is easy to take future growth into negative territory.

Factor in some geopolitical instability, and a low level class war as the 99% bite back, and things could get even worse. And this is without any consideration of Joseph Tainter-style fragilities. Our complex societies have been built on the assumption of ever-lasting growth. Reverse growth and our socio-economic institutions look weak—just look at the challenges facing health provision and pensions in the West.

In total, it may not all add up to Kunstler’s dystopian vision of the future chronicled in his “Made by Hand” series of novels, where society cannot even maintain the necessary technology to sustain transport by bicycle, but it could certainly be a very different world from the one which we inhabit today.

The Wealth of Households and Existential Threats

Among the plethora of statistics put out by governments around the world, numbers on household wealth are relatively rare. The Office for National Statistics (ONS) in the U.K., however, is an exception through its publication of a detailed household wealth survey. Moreover, the survey size is such that we are able to get a sense of the household wealth of the British nation as a whole.

The lessons that can be drawn from this survey are not limited to the U.K. In short, the survey highlights the link between economic growth and individual wealth worldwide.

And here is the result. Aggregate total household wealth in the U.K. was £10.3 trillion (click for larger image, original report can be found here) for the most recent survey period.

Interestingly, the greatest component of household wealth today is pensions rather than property (click for larger image).

END_OF_DOCUMENT_TOKEN_TO_BE_REPLACED

All Change for Employment?

Every month, the benchmark nonfarm payroll employment numbers are reported by the U.S. government and every month Bill McBride at Calculated Risk puts out a comprehensive post analysing the figures. The post (or rather posts) invariably include the following two graphs (click on either graph for a larger image): 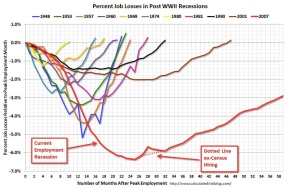 Both graphs suggest that there is something about the current recovery that is different; in other words, END_OF_DOCUMENT_TOKEN_TO_BE_REPLACED