About a 10 minute walk from my home in Oxford can be found the University of Oxford’s Inorganic Chemistry Laboratory. From my photo below, you can see that the building sports a series of blue plaques commemorating the laboratory’s greatest achievements. 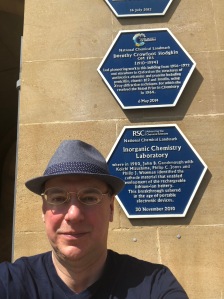 The bottom one reads as follows:

Here in 1980, John B. Goodenough with Yoichi Mizushima, Philip C. Jones and Philip J. Wiseman identified the cathode material that enabled the development of the rechargeable lithium-ion battery. The breakthrough ushered in the age of portable electronic devices.

Goodenough, now aged 95, is still actively researching battery technology to this day. An affectionate review of Goodenough’s extraordinary career by the journalist Steve LeVine can be found here and an article on a controversial new claim by Goodenough here.

What Goodenough and his team managed to do was create a battery cathode stable enough to act as a source of lithium ions without collapsing in upon itself. This allowed a battery to be charged and discharged, yet hold its energy in-between. The team did this through experimenting with a variety of metal oxides until they came across a lithium-cobalt-oxide combination that provided power with stability. To complement this great leap forward in the cathode, progress was required in the anode, and that came in the mid-1980s through the work of Akira Yoshino in Japan. 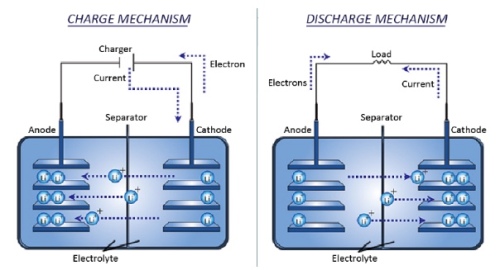 Yoshino’s genius was to match graphite in the anode with Goodenough’s lithium-cobalt-oxide in the cathode. On top of the basic battery chemistry, Yoshino also pioneered a number of fabrication techniques that eventually took the lithium-ion battery out of the laboratory and into commercial production by the Sony Corporation. In short, the Goodenough-Yoshino insights produced a dramatic leap in deliverable power and energy storage. 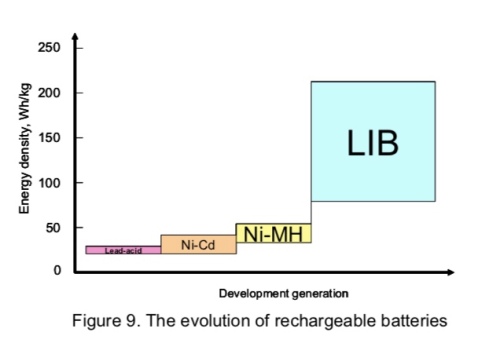 Although the lithium-ion battery revolution of the 1980s ushered us into a world of ubiquitous mobile electronics, it was initially not sufficient to beget the transport and energy storage revolutions Tony Seba talks about in his presentations. Part of the problem here is that the battery makers face an optimisation problem with 6 variables. They need to look at all of the following:

The battery chemistry required is a perpetual trade off between these six. A push for power can compromise safety, and so on it goes. A second problem is that a battery is a multi-component mechanism. You have a cathode, an anode, an electrolyte and a separator. As you tweak the chemistry of one, it will have a tendency to produce unintended consequences in the chemistry of another. 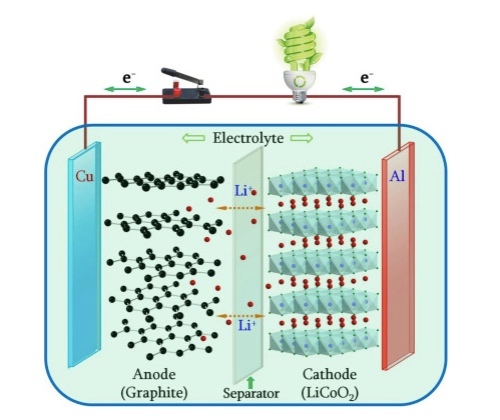 This is a very different relationship from that referenced in Moore’s Law (which is really an empirical observation not a physical law). I blogged on this same topic three years ago (here) and at the time referred to the original 1965 article by Gordon Moore that ushered in Moore’s Law entitled  “Cramming more components onto integrated circuits.”  In the original paper, Moore referred to a doubling of the number of transistors on an integrated circuit board every year, which he later modified to every two years. Either way, the only way you can display that kind of growth on a graph is through using a logarithmic scale as can be seen with what actually happened: 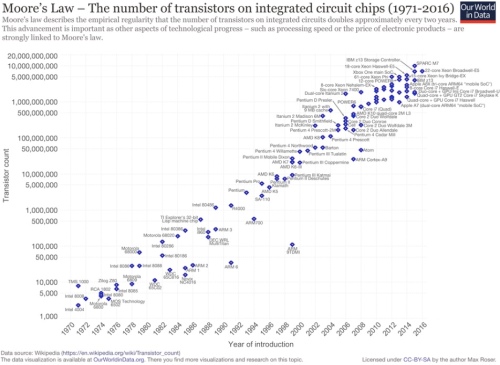 And let’s contrast and compare the Moore’s Law dynamic against battery advances (from here): 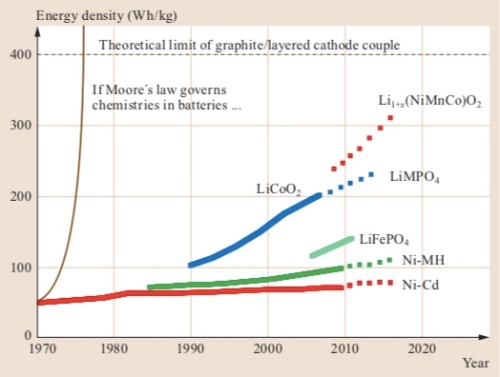 Nonetheless, you can see that considerable progress has been made. Note that the progression from Goodenough’s lithium-cobalt-oxide combination to a nickel-magnesium-cobolt-oxide combination is an advancement of the same type of chemistry, not a new technological leap. Interestingly, Goodenough himself is rather dismissive of such incremental moves, feeling that they won’t be sufficient to supplant the internal combustion engine. From the Steve LeVine interview:

The stakes are high, and Goodenough dismisses a lot of the competing approaches he sees—Tesla’s Elon Musk, for instance, who he says is content to “sell his cars to rich people in Hollywood” while waiting for scientists to create a battery that will power a middle-class electric car. That is not precisely fair—Musk is obviously selling his $80,000 to $100,000 cars to an elite niche, but by 2018 he vows to have a roughly $35,000 model for a broader slice of the market. He is getting there through agile engineering that has provided incremental improvements to his battery.

But Goodenough is equally dismissive of such tinkering and its measly 7% or 8% a year in added efficiency. “You need something that will give you a little bit of a step,” he says, “not an increment.”

By chance, when I blogged about the state of batteries in March 2015, I came to a similar conclusion (even though I hadn’t read the LeVine article at the time):

Tony Seba, Ray Kurzweil and other assorted techno-cornucopians achieve almost instant doublings by assuming growth rates in the high teens or better. Unfortunately, much science progresses in the low to mid single digits, so change is measured in decades–not years.

The distinction is important. Under the Kurzweil logic, we don’t really need to tackle climate change or resource depletion because technology is on the case. Just go about your business as usual, tuck up your kids in bed at night, and scientific innovation will do the rest.

But unless Argonne Laboratory‘s battery guys and their peers step up the pace (which looks exceedingly difficult), electric vehicles will not replace conventional internal combustion engines for a couple of decades or more. That translates into no natural near-term carbon emission mitigation in the field of motor transport. And unless we get very lucky with climate sensitivity to CO2, that also means we will get a lot closer to exceedingly dangerous climate change.

It now appears that I (and Goodenough) could have been wrong: “such tinkering” has managed to deliver double-digit efficiency gains. These gains have, in turn, allowed Telsa to start tipping the market toward EVs at the luxury end with the Model S. And Elon Musk now appears to be doing the same with respect to more compact cars with the Model 3.

If Tesla keeps going into more and more segments (and drags the entire auto industry along with it), then through mitigating (but perhaps not eliminating) the risk of dangerous climate change, Musk, along with Goodenough and Yoshino, will have had more impact on the planet than any human being who has ever lived. We define the Anthropocene as the geological period over which human activity has had an appreciable impact on the environment and climate. Should Tony Seba’s transport and energy revolutions come to pass, it is extraordinary to think that the actions of Goodenough-Yoshino-Musk will have shaped how the Anthropocene unfolds.

I believe that Goodenough and Yoshino certainly deserve to be awarded the Nobel prize for chemistry. Further, should battery efficiency continue to progress at its current pace such that fossil fuels are removed from the transport and energy storage equation, then the role of all three in preventing dangerous climate change will have been immense. Indeed, I can’t think of any three more fitting recipients of the Nobel Peace Prize in such a situation.

Nonetheless, I have got a little ahead of myself in handing out Nobel prizes. While I am far more confident than three years ago that we are close to an EV tipping point, we are not quite there yet. So in my next post we need to dig still deeper into battery efficiency and cost to see whether battery technology can advance just that little bit further to push ICE technology to one side.

Battery Banter 5: The Relevance (or Not) of Moore’s Law

While the back cover blurb tells me that the book reads like a thriller, it is more like Sir Arthur Conan Doyle’s tale “The Dog That Didn’t Bark”. We have two questing groups of heroes: the public-sector Argonne National Laboratory battery guys and the plucky private-sector upstarts at Envia Systems. Yet the book peters out at the end, with both teams abjectly failing in their respective quests to find the super battery Holy Grail. Argonne’s new version of nickel manganese cobalt batteries (NMC 2.0) suffers from chronic voltage fade (meaning that the performance of the battery slumps after repeated recharging cycles). Meanwhile, Envia’s super battery is spectacularly flawed, based on a collapsing anode and dodgy intellectual property.

Despite the book being in need of a good edit, it is still full of interesting insights into the battery development process. In a chapter recounting conversations with Don Hillebrand, an old school auto expert working at Argonne, Levine makes this observation:

Unlike microchips, batteries don’t adhere to a principle akin to Moore’s law, the rule of thumb that the number of switches on a chip–semiconductor efficiency–doubles every eighteen months. Batteries were comparatively slow to advance. But that did not make electronics superior to electric cars.

Consumer electronics typically wear out and require replacement every two or three years. They lock up, go on the fritz, and generally degrade. They are fragile when jostled or dropped and are often cheaper to replace than repair. If battery manufacturers and carmakers produced such mediocrity, they would be run out of business, sued for billions and perhaps even go to prison if anything catastrophic occurred. Automobiles have to last at least a decade and start every time. Their performance had to remain roughly the same throughout. They had to be safe while moving–or crashing–at high speed.

At this point, I want to refer you back to the original 1965 article by Gordon Moore that ushered in Moore’s Law entitled  “Cramming more components onto integrated circuits.” From this, we have the quintessential exponential chart, which delivers a straight line if you put the y-axis onto a logarithmic scale (click for larger image): 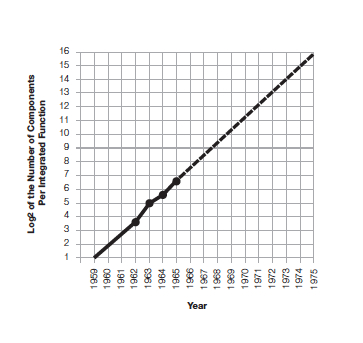 This is the world of Ray Kurzweil‘s singularity which I blogged on in a post a couple of years back called “Singularity or Collapse: Part 1 (For Ever Exponential?“. As knowledge increases by powers of 10, virtually every challenge faced by mankind dissolves. END_OF_DOCUMENT_TOKEN_TO_BE_REPLACED