Usually, a big, fat El Niño sets the world up for a new temperature record; see the correlation in the chart below. (For a good explanation of why, read this post by Bill Chameides of Duke University.)

And for most of 2014, forecasters have been debating whether a big one would or wouldn’t show sometime soon. However, in its latest ENSO forecast, out 6th November, the US government’s National Oceanic and Atmospheric Administration (NOAA) has grown far more “iffy”:

The CPC/IRI ENSO forecast has dropped the likelihood of El Niño again, to 58%, despite the presence of “borderline” El Niño conditions (i.e. warmer equatorial Pacific sea surface temperature, and some reduction in rain over Indonesia). El Niño is still expected, but with less confidence.

But the Australians, in an even more recent update (18th November), think we may see a last minute appearance for this year’s elusive El Niño:

The Pacific Ocean has shown some renewed signs of El Niño development in recent weeks. Above-average temperatures in the tropical Pacific Ocean have warmed further in the past fortnight, while the Southern Oscillation Index (SOI) has generally been in excess of El Niño thresholds for the past three months. Climate models suggest current conditions will either persist or strengthen. These factors mean the Bureau’s ENSO Tracker Status has been upgraded from WATCH to ALERT level, indicating at least a 70% chance of El Niño occurring.

Regardless of whether El Niño shows, it is too late in the year for it to significantly pump up global temperature anomalies. So it should be tough for 2014 to take the number one spot. Or will it?

From Columbia University’s Earth Institute, we can see where the records stand: 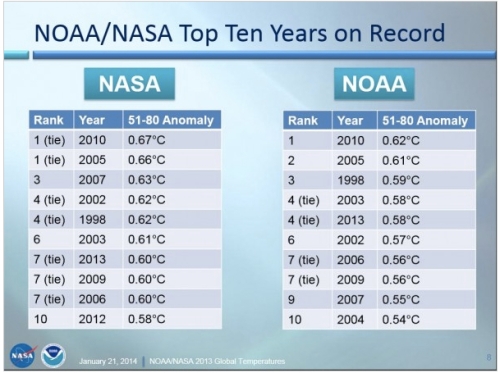 Note: the slight differences between the anomalies recorded by the two US government agencies, NOAA and NASA, are due to different measurement procedures. Nonetheless, for both time series, the years from the last decade dominate the table and broadly align. And for 2014?

The NASA data (here) have been published out to October and show an average temperature anomaly for the first 10 months of the year of 0.66 ⁰C. The nine months of data put out so far by NOAA (here) average 0.67 ⁰C. While the Pacific Ocean may not be characterised as exhibiting a full-blown El Niño, it certainly is on the warm side, with the result that the final months of the year are likely to come in well above average, temperature-wise.

So the annual global mean temperature record looks almost in the bag for 2014. Whether this record will be enough to put paid to the climate skeptic meme that global warming stopped in 1998 is doubtful (the old records will likely be beaten but not smashed). But the evolving data do show that when the next El Niño arrives, it will build on an ever hotter base.

Thus mankind presses ever further into unchartered temperature territory. The foolhardiness of this risk-taking amazes me.