In the Intergovernmental Panel on Climate Change’s Assessment Report 4 published in 2007 we saw this statement:

In a more recent study, there is good agreement between Arctic sea-ice trends and those simulated by control and transient integrations from the Geophysical Fluid Dynamics Laboratory (GFDL) and the Hadley Centre (see Figure 16-6). Although the Hadley Centre climate model underestimates sea-ice extent and thickness, the trends of the two models are similar. Both models predict continued decreases in sea-ice thickness and extent (Vinnikov et al., 1999), so that by 2050, sea-ice extent is reduced to about 80% of area it covered at the mid-20th century.

The year 2012 showed an emergent trend very different from the model predictions and consensus expectations. Another graphic shows how much the Arctic summer world has changed from 20 years ago. 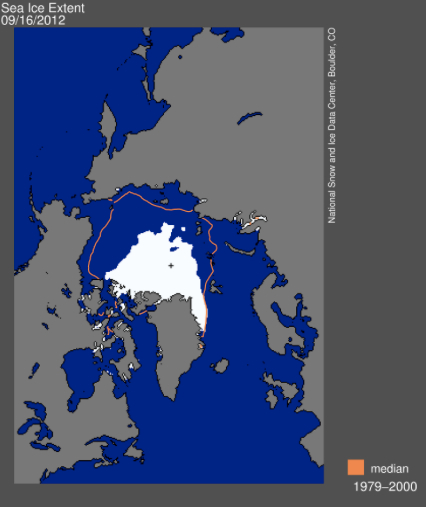 Closer to my personal experience, I recall a bet made between James Annan, a climate prediction scientist who I knew in Tokyo, and Joe Romm, one of the highest profile climate change activist bloggers on the internet made back in 2007. Here is the bet (Joe revisits the bet in a 2011 blog post here):

At no time between now and the end of the year 2020 will the minimum total Arctic Sea ice extent be less than 10% of the 1979-2000 average minimum annual Arctic Sea ice extent, as measured by NSIDC data or any other measurement mutually agreed-upon; provided, however, that if two or more volcanic eruptions with the energy level equal to or greater than the 1991 Mount Pinatubo shall occur between now and the end of 2020, then all bets are voided.

Romm bet that sea extent would break below 10% while Annan said it wouldn’t. As a rational for the bet, Annan commented on his blog back in 2007 thus:

I don’t even have a strong view on the short-term fate of Arctic ice. But for that reason, I think it is unreasonable to claim that all the models and research (which suggests ice-free around mid-century and perhaps later) is badly wrong.

I was a bit player in doing some work with James Annan on climate prediction markets in the past (most of which was driven by the financial derivatives specialist Daniel Bloch). James is a very bright, much-published academic in the field of climate prediction. In particular, previous work by him suggests that a more extreme temperature change of say 6 degree Celsius of warming as a result of a doubling of atmospheric CO2 concentration is highly unlikely, and his papers saying as such are often quoted in the academic literature.

Now, while I am sure for James the bet was not subject to the rigorous analysis of his other work, he obviously wandered into it with some conviction—hence the statement “I think it is unreasonable to claim that all the models and research (which suggests ice-free around mid-century and perhaps later) is badly wrong.”

Well, after 2012, we must be on the brink of making the statement that all the models and research (which suggests ice-free around mid-century and perhaps later) is badly wrong. This, to me, is alarming (and I don’t see myself as an alarmist). (And as for the bet, the odds most have moved from being a sure thing to perhaps 50:50).

Thankfully, few die with a greater-than-expected retreat of sea ice (although the impact on weather is still being worked out). What is alarming, however, is that if the models and research is badly wrong over sea ice it may prove to be badly wrong with permafrost thaw and methane emissions (which in turn could lead to an acceleration in temperature rise).

The collapse in sea ice extent is a horrible surprise from a risk management perspective (like getting a 4 standard deviation stock index movement in my old job). It also buttresses my suspicion that little of what is published by the IPCC is alarmist; rather, when they err, it is far more likely to be toward the conservative. A Foreign Policy article by the scientist Kerry Emanuel also argues as such (here). In conclusion, black swans appear to be alive and thriving in the world of climate science as much as in financial markets—unfortunately, for us all.