Every month, the National Oceanic and Atmospheric Administration (NOAA), a U.S. government federal agency releases, releases data on the concentration of atmospheric CO2 as measured by the Mauna Loa Observatory in Hawaii. This is the longest continuous monthly measurement of CO2 and dates back to March 1958, when 315.70 parts per million (ppm) of CO2 was recorded.

The Intergovernmental Panel on Climate Change (IPCC) uses the year 1750 as the pre-industrialisation reference point, at which date the atmospheric concentration of CO2 was approximately 280 ppm according to ice core measurements.Key numbers relating to release: 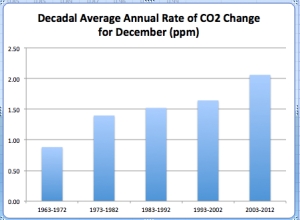 Atmospheric CO2 displays annual seasonality: concentrations decline in the spring during the growing phase of terrestrial vegetation and rise in the autumn as vegetation dies and decomposes. The cycle is dominated by the northern hemisphere growing season since the northern hemisphere contains over 65% of the globe’s land mass. The cyclical pattern can be seen in the following chart (red line). The black line is the adjustment for seasonality.

The official NOAA CO2 data source can be found here, but a slightly more timely release is made of the same data by the Scripps Institution of Oceanography here. 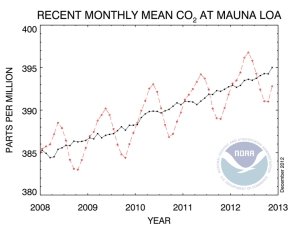 The rise in annual CO2 is due to fossil-fuel emissions and land-use change. However, there also exists some minor non-seasonal year-to-year variation related to weather, drought, fire, volcanic eruptions and ocean current changes.

Like Loading...
This entry was posted in Climate Change and tagged CO2, NOAA, Scripps. Bookmark the permalink.