This is my second post on the  National Intelligence Council (NIC) briefing for the  U.S. president called “Global Trends“, a report that looks at potential risks to the United States 20 years ahead. The first post (here) dealt with climate change, but in this post I want to take a look at how the Intelligence Community views the potential threat of a future energy constraint on the U.S. and world economy.

The quick answer: not much of a threat at all.

In a likely tectonic shift, the United States could become energy-independent. The US has regained its position as the world’s largest natural gas producer and expanded the life of its reserves from 30 to 100 years due to hydraulic fracturing technology.

The one-hundred-years-of-gas refrain was also a feature of President Obama’s State of the Union address back in January 2012. I blogged about the authenticity of the claim then. Enough to say that both the President and the NIC appear to be confusing resources with reserves. The industry association Naturalgas.org has a good explanation of the difference here, including the following  component chart (click for larger image):
.

.
In the middle of the chart, we have the category of ‘Proved Reserves’, probably the most useful starting point for any analysis of future natural gas supply. Naturalgas.org defines them as follows:
.

Proved reserves are those reserves that geological and engineering data indicate with reasonable certainty to be recoverable today, or in the near future, with current technology and under current economic conditions. According to the Energy Information Administration (EIA), the statistics arm of the Department of Energy, ‘reasonable certainty’ implies that there is a 90 percent probability that the natural gas actually recovered from those reserves will exceed the amount that is estimated beforehand to be recoverable.

And it is very true that progress in fracking technology has made a big difference in how proved reserves have evolved through time. The latest release by the EIA on proved reserves was in August 2012. The table below outlines the state of play at end 2010 (click for larger image):

.
From the table, we see that in 2010 natural gas production was 23.2 trillion cubic feet and proved reserves stood at 317.6 trillion cubic feet. This gives us around 14 years of reserves. Note the Alison in Wonderland Red Queen quality to all oil and gas discussions: because you are continuing to burn natural gas and oil, you need to run just to stand still. The year 2010 was surely a bumper year for natural gas, but overall only around 6 months of reserves were added.
.
We can go further up the Naturalgas.org component chart and start pulling in ‘probable reserves’ and ‘possible reserves’. But to do so, we have to speculate about the progression of technology and price.
.
The price part is critical. For an economist, you can’t have your cake and eat it. The easiest way to get those ‘probable’ and ‘possible’ reserves into the category ‘proved’ is by keeping a consistently high price. But if you have a consistently high price, your economy doesn’t have access to an abundance of cheap energy. The EIA recognises this fact, and at the current relatively low price of natural gas does not see large production increases going forward. This chart from the EIA’s latest Short-Term Energy Outlook published on the 8th January shows gas output flat-lining near term (click for larger image).
.

.
Much of which is on the back of higher prices:
. 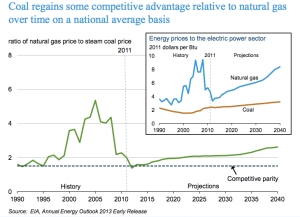 .
At this stage, it is worth going back and reading the landmark article by Colin Campbell and Jean Laherrere in Scientific America (here) in March 1998 that brought the topic of Peak Oil back into the public domain. The article ends with an excellent summation of Peak Oil thought:
.

The world is not running out of oil—at least not yet. What our society does face, and soon, is the end of the abundant and cheap oil on which all industrial nations depend.

In the same vein, the world is not running out of natural gas; it is, however, running out of cheap gas. At an ever-rising price, fracking will bring forth greater quantities of gas and oil. However, higher gas and oil prices destroy demand and stunt economic growth. This is all economics 101, but in most of the current pieces of analysis on shale a world is presented where we appear to have detached ourselves from price.

.
The NIC also goes on in the main body of the report to speculate on the potential of US natural gas exports:
.

US production of shale gas has exploded with a nearly 50 percent annual increase between 2007 and 2011, and natural gas prices in the US have collapsed. US has sufficient natural gas to meet domestic needs for decades to come, and potentially substantial global exports.

This paragraph sounds very upbeat, but let us deconstruct it. First, it is true that shale gas production has exploded—but from a very low base. At the same time, conventional natural gas has experienced a continued decline. For the economy as a whole, we don’t care whether we are using shale gas: natural gas is natural gas.

Total dry natural gas production went from 19.3 trillion cubic feet in 2007 to 22.9 tcf in 2011 (data source EIA here). That is a 15% increase. Not bad, but hardly a ‘tectonic’ shift over a 5 year period. Further, natural gas prices have collapsed, but in the wake of this price trend production has also flat-lined. In short, it has become uneconomic for many producers to pump shale gas. And as for exports, what does the EIA predict?
. 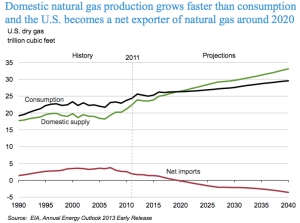 .
According to the EIA, the U.S. will become a net exporter of natural gas by the year 2020, and by 2040 is exporting around 5 trillion cubic feet a year, most of which goes to Mexico and Canada:
.

.
So outside of exports to near neighbours, we will see just over 1 trillion cubic feet entering the global traded LNG market from around the year 2028. A big number? Of course, it is impossible to tell without putting it in context. The International Energy Agency OECD in its World Economic Outlook 2012 puts gas demand at 4.6 trillion cubic metres; excluding the U.S. takes that number down to around 3.6 trillion cubic metres. When looking at energy statistics, you almost never see numbers presented in the same unit. In this case, we need to know that 1 cubic metre is equivalent to 35.3 cubic feet. So at around the time the U.S. is predicted to be ramping up LNG exports to 1 trillion cubic feet, the world ex-U.S. is consuming 127 trillion cubic feet. In other words, exports will be less than 1% of demand. Is this a game changer or a rounding error?
.
The NIC’s analysis of oil, particularly shale oil, also appears to lack any understanding of economic fundamentals. Apparently, the largest fear is that too much oil could spark off instability in the Gulf states:
.

The US would import less or no crude oil from its current suppliers—Canada, Mexico, Saudi Arabia, Latin America and West Africa, forcing them to find alternative markets. A dramatic expansion of US production could also push global spare capacity to exceed 8 million barrels per day, at which point OPEC could lose price control and crude oil prices would drop, possibly sharply. Such a drop would take a heavy toll on many energy producers who are increasingly dependent on relatively high energy prices to balance their budgets.

.
Perhaps. But this is not what the market is telling us. With a real technological revolution—one that could truly be called a ‘game changer’— we will see two things: 1) falling price AND rising volume. With gas, we are seeing falling prices in the U.S. (not globally I might add) but we are not currently seeing a rise in volumes. For oil, we are seeing a marginal rise in volumes but we are not seeing a fall in price (indeed the average Brent oil price for 2012 hit another record). The NIC appears to have absorbed the shale hype and ignored the market’s message. For this reason, I have to give the NIC’s analysis an F.
.