Welcome, Most Americans, to a Post-Growth World

The degree to which rising living standards link to happiness is something I want to return to at a later time (it’s complicated). But capitalism has always liked to keep score using money-based estimates of wealth and income. On both counts, something isn’t working for most U.S. citizens. The U.S. Census Bureau’s net worth numbers are below (hat tip to Early Warning, click for larger image, link to Census Bureau report here): 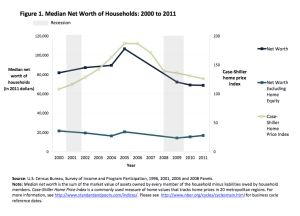 Of course, the housing slump appears to have done most of the damage. So if the housing market rebounds everything will be OK? Maybe. Unfortunately, median income trends appear more entrenched and just as dire (click for larger image, link to Census Bureau report here):

For those with hazy stats, if you put all American households on a line from poorest to richest, the median would be the one in the middle. Unlike the mean, it is not skewed upward by such U.S. oligarchs as Bill Gates, Warren Buffet, Larry Ellison and the Koch brothers. Welcome, most Americans, to a post-growth world.

2 responses to “Welcome, Most Americans, to a Post-Growth World”