Over the last few days, one of my favourite bloggers, Stuart Staniford of Early Warning, has done a couple of posts looking at the impact of climate change on food production. I generally agree with most of what Stuart writes, but on this occasion I have a number of major caveats. Indeed, I think his analysis paints a far too rosy picture of agricultural production in an era of climate change.

Before we start, we need to be a little careful about equating extreme weather with climate change. Given that we are in the foothills of global temperature rise, we can’t specifically assign particular events to climate change. The whole question needs to be looked at in probabilistic terms. Here is Bob Corell, Jeff Masters and Kevin Trenberth writing an opinion piece in Politico after Hurricane Sandy.

Overall, we know that climate change has stacked the deck so that this kind of event happens more frequently. That answer, however, prompts a deeper, more unsettling question that many want to know: is climate change worsening some recent extreme weather events like super storm Sandy? The short answer is yes. Climate scientists broadly agree that the extreme weather we’ve seen over the past few years is exactly what we’d expect to see in a changing climate.

Nonetheless, for the sake of argument, let’s just hypothesise for a minute that recent extreme weather events such as the droughts in Australia, the U.S. and Russia are due to climate change. I will run with this assumption because Stuart appears to be claiming that regardless of how we categorise recent extreme weather events, they are not showing up in the agricultural production data—or, ultimately, in people’s stomachs.

So, clearly, the overwhelming story in global agricultural yields is this: improving agricultural technology has increased yields at a steady, reliable pace – they have more than doubled over the last 50 years. There just is absolutely no support in the data for the idea that climate change, or any other negative or scary factor you care to name – eroding soil, depleting aquifers, peaking oil supplies – is causing the agricultural yield curve to start bending downward. Maybe they will in the future, but it sure isn’t happening yet.

And he updates and republishes this chart to reinforce the point:

Which allows him to reach this conclusion which does not just cover yields but also overall production:

Climate change is scary, we are clearly melting the north pole, droughts and floods and heat waves are increasing over time. However, so far, it’s not hitting us where it would really hurt: in the stomach.

The chart looks like compelling evidence that climate change is not showing up in food production, but there are a number of problems.

First, he has fit a linear line through the data points. Why? Well, because it fits the data. But my old statistics teacher would have had a problem with this. You not only need to fit a line or curve to data, but also need to have a theoretical reason for so doing. Now we have to be very careful here. When we fit a linear line we are saying that the rate of growth (an exponential) is slowing down.

The FAO, from whom Stuart takes his data, is completely aware of this problem. In the Executive Summary of the FAO’s How to Feed the World in 2050  report we read this:

In developing countries, 80 percent of the necessary production increases would come from increases in yields and cropping intensity and only 20 percent from expansion of arable land. But the fact is that globally the rate of growth in yields of the major cereal crops has been steadily declining, it dropped from 3.2 percent per year in 1960 to 1.5 percent in 2000.

The next sentence takes issue with those who feel a linear rate of increase is sufficient to prevent hunger:

The challenge for technology is to reverse this decline, since a continuous linear increase in yields at a global level following the pattern established over the past five decades will not be sufficient to meet food needs.

You can see the slowdown in productivity gains in this World Bank chart which the FAO reproduces here (click for larger image):

Accordingly, Stuart’s beautifully fitted straight line is a demonstration of us getting worse at securing productivity gains out of agricultural production. Now, given this decline predates any worries over climate change, we can safely say that the prime mover of the fall is due to diminishing returns to technology—whether fertilizers, pesticides, herbicides, GMO or whatever—in the 1970s, 80s and 90s.

It is quite difficult, however, to say what is bringing down the exponential rate of growth in the 2000s and 2010s. Is it the same old diminishing return drivers of the 1980s and 1990s (and note that cornucopians like Kurzweil, Diamandes and Kotler all claim we are in a technology driven exponential nirvana), or have climate change prompted extreme weather events also entered the mix? We don’t really know.

The second issue I have with Stuart’s analysis is that his chart mechanically takes the yield time series from the Food and Agriculture Organisation (FAO)’s FAOSTAT database here. Yield as defined in this database is  production quantity divided by area harvested. The problem here is that climate change can show up in area harvested, not just the yield. You can see this in the chart below, where I have taken area harvested and total production numbers from the same database (click for larger image): 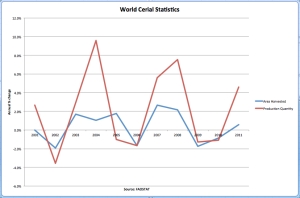 As can be seen, most of the largest falls in production are the result of slumps in harvested area. There can be a variety of reasons for negative changes in the area harvested: voluntary withdrawal of land from production due to low prices, extreme weather disrupting planting, or extreme weather preventing harvesting all come to mind.

However, as the FAO price chart below shows (data from here), real prices have remained elevated since around 2005. If you could get land planted and harvested, you would have made super-normal profits. For the two years 2009 and 2010, area harvested was falling because something was preventing farming from taking place (click for larger image). Anecdotally, we know these were years of extreme weather.

I also have another problem with Stuart’s analysis: climate change can show up in price as well as volume. Accordingly, higher prices may translate into greater hunger as richer consumers bid away food from the poor.

On his blog, I commented that perhaps climate change may manifest itself in the form of price changes as well as production changes. In reply, Stuart blamed rising biofuel production for the jump in prices. I would certainly agree that biofuel production, together with soy bean production to meet Chinese demand, are major drivers of price, but we certainly don’t have enough data to completely exclude the impact of extreme weather. Further, this would not explain the down years in both area harvested and aggregate production.

Here is a chart taken from a paper by Abbot, Hurt and Tyner of Purdue University for the Farm Foundation called “What’s Driving Food Prices in 2011”. It draws on United States Department of Agriculture data; in short, the category of production that includes biofuels. What we see here is a nice, smooth curve pointing upward. In and of itself, it can’t explain either the volatility in aggregate production or prices.

A slightly different approach is taken in a discussion paper (here) by Joachim von Braun and Getaw Tadesse from the Center of Development Research, University of Bonn. For them, food price formation consists of trends, volatility and spikes within a complex process as this schematic shows (click for larger image).

We should keep in mind that the food price spikes of 2008 and 2011 are both associated with extreme weather and a reduction in area harvested. Against this background and in direct contradiction with Stuart’s assertion that climate change is “not hitting us where it would really hurt: in the stomach”, von Braun and Tadesse have this to say:

To so forcefully claim that the null hypothesis is true—that is, there is no sign of climate change in the data—seems to me an extraordinary assertion. That said, I am not claiming that the alternative hypothesis is correct either (that climate change is already bearing down on food production): we just don’t have enough data. But from the scant data we have, I think there are no grounds for complacency.

One response to “Stuart Staniford, Climate Change and Food Production”