I haven’t looked at food prices for a number of months, so thought it time to revisit the benchmark indices.

The Food and Agriculture Organisation of the United Nations (FAO) releases a series of monthly price indices for a variety of food commodities (here) at the beginning of each month. The headline FAO Food Price Index is a composite of five food groupings: meat, dairy, cereals, oils and fats and sugar. The base 100 is the indexed averaged price for the 2002-2004 period. The November 2013 index number was released on December 5th. Key points are as follows:

Given the new land that has been coming into production and a general lack of adverse weather, I am quite surprised that the index has stayed so high. However, this is mostly due to strength in meat and dairy prices, both near their all-time records. By contrast, cereals are down 24% from their recent high in November 2012.

The FAO’s food price index is non-weighted, and so is a rather simplistic measure of food price inflation. By contrast, the World Bank issues a trade-weighted index of food prices which can be found in the quarterly Food Price Watch. Nonetheless, the broad story is similar, with food prices off their highs but showing no signs of returning to the levels seen a decade ago. 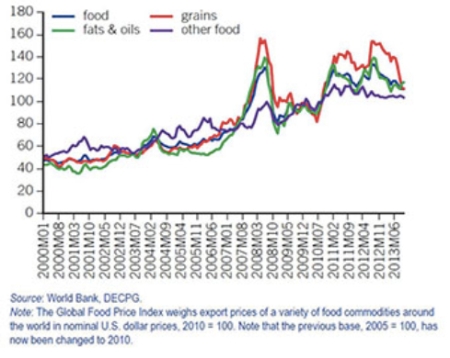 Reuters reports that Macquarie has launched an even more useful index of agricultural futures prices whose weights are based on global consumption of each commodity. I expect that such a time series will only be open to those with a Bloomberg or Reuters terminal but will confirm this going forward. As reported by The Financial Times, the Macquarie analysts behind the index expect bumper harvests to weigh on food prices for the next year or so before a modest rebound takes place. A similar view comes out of the Economist Intelligence Unit.

While high prices have been encouraging more agricultural investment (buttressing the old saw that the cure for high food prices is high food prices), the  joker in the pack remains extreme weather.

Agriculture will always be cyclical since high prices beget supply, which brings down prices, which in turn reduces supply and so on and so on. With climate change, however, weather will be far more volatile, so making the timing of the agricultural investment cycle much more difficult. The net effect will be to keep long-term average prices higher than they otherwise would have been (as farmers need a greater return for greater risk).

With this in mind, plus the fact that the prices of fossil-fuel related inputs into agriculture also remain elevated, I see no likelihood that food prices will return to their 1990s inflation-adjusted levels. We are more likely to witness new food price index records as the decade progresses, but perhaps not just yet.