If you follow the climate change debate over time, it is difficult not to get depressed: it’s the feeling of helplessness as the slow-motion cash crash takes place before your eyes.

So when a little bit of light shines through, it comes as a relief. And sometimes, hope comes from the most unlikely of sources–in this case China. It is almost a truism that as go China’s CO2 emissions, so go the world’s. See the chart below (Source: Trends in Global C02 Emissions Report; click for larger image):

Very roughly, global CO2 emissions have gone from around 24 billion tonnes per annum in the early 1990s to around 36 billion tonnes today: an increase of 12 billion, or 50%.

Taking the top six emitters, we see can China’s prime role in this growth more clearly (click for larger image):

The Global Carbon Project sees emissions continuing to grow to 43 billion tonnes in 2019 (note giga is equivalent to billion).

And again it is China leading the trend: 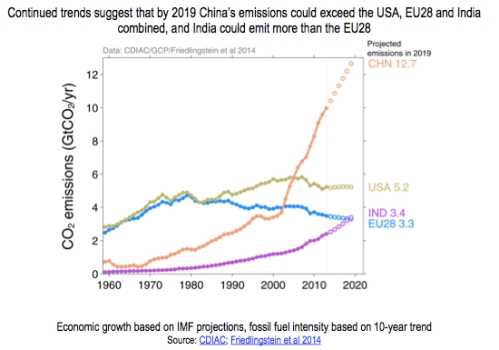 And keep in mind that we have a CO2 budget of around 1,200 billion tonnes of CO2 before we commit the earth to 2 degrees Celsius of warming with a 66% probability. On current trends, that budget will be used up by about 2041, or in around 27 years.

Over that period, China is likely to emit approximately 15 billion tonnes of CO2 per year on average on present trends. That would mean that by 2041, China would have emitted about 400 billion tonnes of CO2, or a third of the total budget available. Next question: is there any way China can free up more of the budget?

A paper by Luukkanen et al provides us with a detailed decomposition of China’s future emissions using a Kaya identify with a sectoral overlay. To refresh your memory, the Kaya identity allows us to estimate future emissions based on population growth, GDP growth per person, energy intensity per unit of GDP, and carbon intensity per unit of energy (see my post “The Unbearable Logic of the Kaya Identity” for a little more detail).

Note that the above charts are only looking at fuel combustion emissions. Accordingly, these numbers don’t tally with the Global Carbon Budget numbers that also add in agriculture and industry-related emissions. Nonetheless, where fuel emissions go, so will total emissions.

Here is where the silver lining comes: the most-muted emissions scenario above, termed ‘policy’, still looks far too high growth-oriented to me. Here are the assumptions that underpin this scenario `click for larger image):

In the policy scenario, a GDP growth rate of 7.4% is still forecast between 2016 and 2020, and then 5.2% growth  between 2021 and 2030. If you believe in a much quicker slow-down scenario, which I do, then these numbers look hopelessly optimistic (from a growth rather than climate perspective). See my post referring to Michael Pettis’ work.

If you then combine a much swifter descent to growth rates of 3-5%, plus a continued pivot from investment-led growth to consumption-led growth, and then add on an aggressive renewables roll out (which we are seeing), then China could free up an additional 100 billion tonnes of the carbon budget.

Frankly, that still doesn’t get us anywhere near capping climate change to 2 degrees of warming, but it gives us a little bit of extra time. And given where we are, every little bit helps.

Leave a Reply to The Rational Pessimist Cancel reply