Chart of the Day, 4 Feb 2015: Finding the Missing Heat and What It Means for Risk

The climate change debate generally focuses on the atmosphere–or rather two metres of the atmosphere through which we wander. Accordingly, the flagship statistic for climate change is the global mean temperature anomaly (latest update on this by me here). This is understandable: we are not fish.

Nonetheless, global warming refers to the globe, of which the atmosphere is a little piece. So we always have to remind ourselves of what warming goes where. From The Carbon Brief:

Consequently, if the rate of transfer of heat into the ocean fluctuates (which it does), this will have a significant impact on atmospheric temperature. The largest short-term source of heat transfer volatility between atmosphere and ocean is the ENSO cycle, with El Ninos being associated with hot atmospheric years and La Ninas with cool ones.

Once we strip this factor out (plus the smaller impacts from the solar cycle and volcanic activity), then the upward march in atmospheric surface temperatures becomes a lot smoother. That is the difference between the orange and red lines in the chart below from a Real Climate blog post by Stefan Rahmstorf.

Nonetheless, while we have had a broad-brush understanding of the atmosphere-ocean interface for quite some time, the granular detail on what energy is going where is only just emerging. The establishment of the ARGO network of temperature-measuring buoys is the game changer here (Carbon Brief; click for larger image).

The data only goes back to 2006, but nevertheless this has been sufficient to give us a better picture of where the energy sinks exist. From a new paper in Nature Climate Change by Roemmich et al we see this (click for larger image): 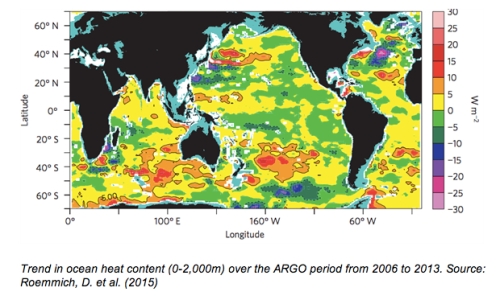 In an email chat, Yair Rosenthal of Rutgers University and Braddock Linsley of Columbia University, whose related work was explored here in 2013, said the Argo analysis appeared to support their view that giant subtropical gyres are the place where heat carried on currents from the tropics descends into the deeper ocean.

Linlsey said: “I think the Argo data point to the central gyre regions as key to the ocean-atmosphere heat exchange story.”

Rosenthal noted that this heat-banking process could buy humanity time, providing what he has called “a thermal buffer for global climate change,” particularly because the deeper ocean layers are still relatively cool (compared to much of the Holocene period since the end of the last ice age).

The critical point here from a risk perspective is that the heat-banking process “could” buy humanity time. The problem with this is that it also possibly “could not”.

We are at a stage where we are learning of the existence of the giant subtropical gyres but we know little about how they function or evolve through time. If these gyres have been responsible for an increase in heat transfer to the deep ocean over the last decade or so, it is quite possible that they could be responsible for a decrease in heat transfer at some future time. At this stage, we just don’t know.

We may have graduated from the stage when we were dealing with an ‘unknown unknown’ to a ‘known unknown’ but this hasn’t made much of an impact on how we can assess risk. In short, we are still learning about the probability distribution associated with warming outcomes. Yet within that distribution, a far-from-negligible chance of 4 degrees Celsius plus of temperature rise by end-century exists. Further, we know that a 4 degree rise would be catastrophic.

The good news is that the probability distribution of warming outcomes we are dealing with–unlike those for volcanoes or tsunamis–is one where we control one of the key variables: the trend in emissions. The bad news is that we aren’t controlling that variable.